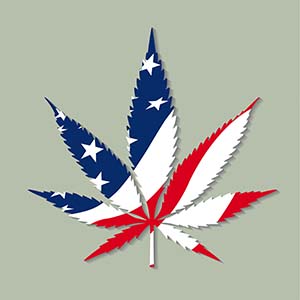 Marijuana shops in Colorado set new revenue records in September, and that's why we have our eyes on three marijuana stocks to watch for 2017.

That's a 34.95% increase in sales in just 12 months. September 2016 also marks the third consecutive month of new sales records for marijuana in Colorado.

From January to September, marijuana sales have generated $974.3 million in Colorado. In that same time frame last year, sales were $733.8 million.

And with the legalization of recreational marijuana in California, Massachusetts, Nevada, and Maine, you can expect other states to start generating millions and eventually billions of dollars by taxing marijuana sales. 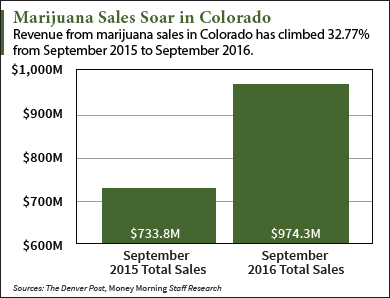 But the states aren't the only ones who will profit…

You see, some are calling marijuana the gold rush of the 21st century. Everyday investors are already plotting seven-figure weed windfalls with the top pot stocks from every ecosystem -growers, edibles, dispensaries, and more.

That's why today, we will provide Money Morning readers with the opportunity to receive a free 90-page cannabis investing guide called "The Roadmap to Marijuana Millions."

We'll get to that in just a bit.

But first, we wanted to share with our readers three marijuana stocks to watch for 2017…

Marijuana Stocks to Watch No. 3

If you want to let American companies be free to compete for market share, write your senators and urge them to oppose Jeff Sessions nomination for US Attorney General. If he is nominated, your investments in US companies will NOT be safe, and your moneys will be better invested in Canadian companies. Jeff Sessions is viciously opposed to even the medical use of cannabis, and his actions as USAG will cause chaos in the states, much like what happened in California a decade ago… Your investments will be destroyed