While in London recently at an exchange with British Academy President Lord Nicholas Stern, Federal Reserve Chair Janet Yellen really let the cat out of the bag.

She told Stern that banks are now "very much stronger," with another financial crisis like the one in 2008 unlikely to happen anytime soon, and not likely "in our lifetime."

According to Yellen, the Fed has "learned" from the Great Recession of 2008 and is now more watchful over underlying risks in the financial system. She's comfortable saying, "I think the system is much safer and much sounder."

Really, it's just more of the hubris that got us into the last financial crisis – the one that dragged the global economy to the edge of a precipice and vaporized trillions in wealth. I'm sure you remember it well, even if Yellen seems a little foggy on the details.

On the one hand, central banks periodically warn us against overpriced assets, interest rates at or near extreme lows, and excessive borrowing.

And on the other hand, it's their freewheeling, easy-money policies, ostensibly put in place to stimulate the post-crisis economy, that have just coaxed global debt levels to new records.

That, in my view, has only pushed us further along toward the next crisis. With debt completely out of control all over the world, it won't take much to tip the cart over.

Student debt, subprime auto loans, credit cards, name it: Any one of a number of debt bubbles could be the last straw.

During a May 2015 CNBC interview, crisis-era Treasury Secretary Tim Geithner's own words were, "There's been a tremendous loss of confidence in public institutions and in government." 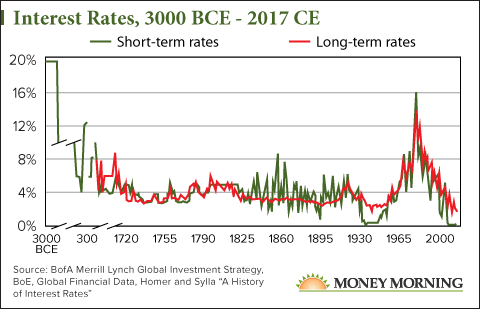 Geithner also said there will be another financial crisis where the treasury secretary will go to Congress asking for billions (or trillions?) to bail out banks.

I give a lot more weight to the candor of a former government official warning against a future crisis than a current Fed chair saying "not in our lifetimes."

In the past year alone, global debt has swollen by an additional $500 billion. That puts worldwide debt into record territory, ringing in at an almost incomprehensible $217 trillion.

As Reuters tells it, the Institute of International Finance (IIF) reports global debt is now a whopping 327% of worldwide economic output.

It's gotten to the point where you'd be hard-pressed to find a tight belt anywhere in the public or even private sector.

That's right; it's not just consumers and governments reaching their borrowing limits, but corporations, too.

And that's been just fine for yield-happy investors who've had to chase yields to make up for the fact that their money's not working for them.

One paragraph says Shah is averaging 59%, while another says 44%. Which is it?
I agree that Shah has made some great trades. But can you show us the calculations for the average daily gains? Compounding at 59% or 44% would make us readers $100,000+ wonders by now.