But the former secretary of state and front-runner for the 2016 Democratic nomination for president has much more in common with the disgraced Republican president than you might think. 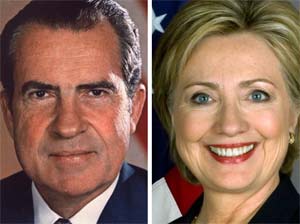 Oddly enough, Clinton even has a personal link to the infamous Watergate scandal that ended Nixon's presidency. She was on the staff of the House Judiciary Committee in 1974 as it conducted the impeachment inquiry of Nixon.

But in recent years, Hillary Clinton has been tearing pages out of Richard Nixon's playbook. Take the email scandal, for example.

One of the more troubling pieces of the Hillary Clinton email scandal is that Clinton herself decided which of the more than 60,000 messages were work-related. She deleted 30,000 of them, so there's no way to tell if any of them were in fact work-related, unless the FBI's technical experts can recover them from the server.

Nixon had his tapes, an automated system that recorded conversations in the Oval Office. Part of the Watergate scandal was an 18.5 minute gap in those tapes – erased by an unknown Nixon staffer.

"It's extraordinary – 60,000 emails and Hillary Clinton has said 30,000 of them, half, were personal and they were deleted. Who decided that? What's on those emails?" Washington Post Associate Editor Bob Woodward said in an appearance on MSNBC's "Morning Joe" program in August.

Woodward and partner Carl Bernstein, of course, did most of the reporting on the Watergate scandal that eventually forced Nixon's resignation.

"It, in a way, reminds me of the Nixon tapes," Woodward continued. "Thousands of hours of secretly recorded conversations that Nixon thought were exclusively his, that he was not going to give them – Hillary Clinton initially took that position: 'I'm not turning this over. There's going to be no cooperation.'"

Hillary Clinton's behavior throughout the email scandal shows that she and Richard Nixon have disturbingly similar character flaws. Here's a look at how much these two are alike…

She's guilty as he'll. If anyone in government were caught doing what she did they would have been fired and prosecuted as a traitor for breaking classified information rules. And deleting emails, which immediately implicates her. If she does this as SoS what do you think will happen as the POTUS. God help us.

Guess who grabbed all Foster's files when he turned up dead in the park?? What was in those files??
Why should mrs clinton worry if there was nothing to hide? mrs clinton must have lied to cover for bill… In my opinion she is a consummate liar and should be in jail!!! The thing that is scary is many americans dont know the person that she really is… I hope it all comes out, all of her sinful past in my opinion the woman is evil!!

Absolutely true. I could not have said it better myself.

Still, going back as far as Hoover, Democrats have a far better record of improving the economy than Republicans.

God help us? You got to be kidding. Pull up your socks and help yourself. We have work to do to get rid of this woman. Get out the vote on the other side.

On the contrary: Nixon's actions and personality shortcomings pale in comparison to Hillary's!

All the commentary and argumentation in the world is going to change not one damned thing in this power-elite run world and Robert Prechter's Socionomic Theory has argued why the next president will be a female (can you guess who?). When the secret societies (who JFK pointed out in his long hidden from the public speech warning of the "secret societies that manipulate the masses by covet means) decide who our 'leaders' will be, THAT'S WHO OUR
LEADERS WILL BE!

I can't believe you are covering these issues to begin with. I pay you for stock advice not for political advice. I can get your knocks on Mrs. Clinton daily by watching Fox "News."

I would comment on Hillary but I don't want to wake up dead in Fort Marcy Park!

She ,Obama and John Kerry should be charged with treason , tried in Federal Court and placed in prison when convicted ! With her e-mail scandal and Four dead Americans she and Obama lied about!Why not?