Back in my high school and college days, I used to take breaks from studying by going to the local arcade.

And one of my favorite games to play was Breakout.

Breakout was a game that was developed off the heels of the Steve Jobs and Steve Wozniak game Pong, which proved wildly successful in the '70s.

Now you might be reading this and wondering why a trader is writing about a game.

And more importantly - what the heck a game has to do with options trading.

Well, the answer is... everything.

The point of the game is to keep the ball bouncing off the top and side walls of the screen without letting it fall to the bottom of the screen.

You advance to the next level by breaking through the top of the screen.

But getting there isn't pure luck... there's actually a pattern players need to be able to identify in order to calculate their next moves.

And this is just what good traders do when it comes to the stock market - using "breakouts" and "breakdowns."

A breakout is a price movement that occurs when a stock trades above the "resistance" line of a trading range. It's typically followed by higher volatility and trading volumes.

You may have also heard of "breakdowns."

A breakdown is a price movement that occurs when a stock trades below the "support" line of a trading range. As with a breakout, it's typically followed by higher volatility and trading volumes.

You can profit from breakouts or breakdowns because you can identify how a stock price will move before it actually happens.

And what's better, especially with the volatility we've been seeing, is that breakouts and breakdowns occur in ANY market condition. 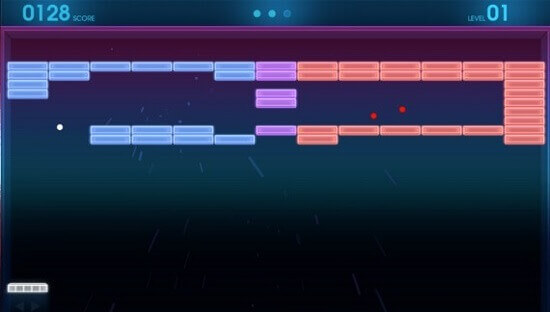 Let's look at breakouts and breakdowns using the above image of the game Breakout.

As you can see, there are four walls. But for the purpose of discussing breakouts in trading, we're only going to focus on the top and bottom walls.

Now let's say that the stock is the ball - it can either bounce up or down. If it bounces up, it hits the top wall. This would be considered the "resistance" level.

Resistance is the price level at which the stock consistently hits and tends to find resistance from going any higher. In other words, it's the price level the market has difficulty surpassing because of high selling volumes.

Alternatively, if the ball bounces down, it hits the bottom wall. This would be considered the "support" level.

When the stock (the ball) breaks through the resistance or support levels (the top or bottom walls), it's no longer considered to be within the "trading range."

A trading range is the range between the high trading prices and the low trading prices over a specific time frame. It can be horizontal, which is when the price travels between strong levels of support and resistance levels. Or it can taper into a point forming what's called a triangle formation. Triangles can be ascending, descending, or symmetrical.

Let's look at some examples... 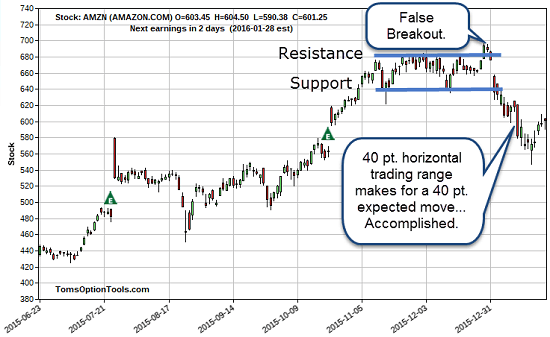 In the image above, we are looking at an example of a horizontal trading range (or channel). This is formed when resistance and support hold at basically the same price over a period of time (the price is tested consistently during the specified time frame).

Now the breakout runs down through the support level, so this is a breakdown. The anticipated price move after the break is the price amount of the range to the downside.

What we're looking at below is an example of an ascending triangle. This is formed when resistance is horizontal and support slopes upward from left to right - where it eventually forms a point and breaks out above the resistance line. 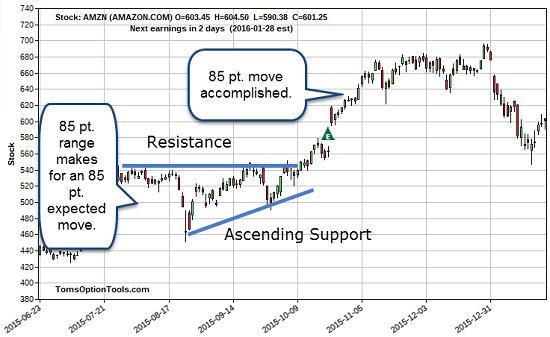 As you can see above, the widest point of the mouth of the triangle is 85 points (the distance from the support level of 460 to the resistance level of 545 is 85).

Once you've identified this, you'll want to try and gauge how long the triangle pattern has played out and use that to assess how far out the expiration date for your options should be.

If it takes two months, you'll want to give your trade at least three months to work. If it will take more than 20 to 30 days to work, then you might favor a slightly "out of the money" option.

And if you anticipate needing between 20 and 30 days for a trade to work, then I favor short-term "in the money" options.

4 Things to Remember When Using Breakouts and Breakdowns

There are four things to keep in mind before using breakouts or breakdowns to trade:

If the stock breaks out, make sure that it either closes above the resistance level or below the support level. In the case of a false breakout, it may be wise to cut your losses short.

For example, say a stock looks to be breaking out but then falls back into the trading range. This would be considered a false breakout, and it usually happens within one to three days after it started breaking out. More conservative options traders would wait for about three days before initiating their option trades, despite the risk of missing out on the move if it doesn't actually fail.

NOTE: If a stock tries to break out to the upside but within a day or two falls right back into the trading range, you might want to consider cutting your losses on a bullish trade.

I encourage each of you to search these out and study them so you are prepared for them when they come your way.

And while everyone else waits for price moves to happen, you'll be on your way to the bank.

How to Remove the Stress from Stock Picking: Stock picking can be an exercise in frustration, but there are ways to simplify the options trading process. With this tool, you can target profit opportunities in the strongest market sectors - all while protecting against risk and volatility...