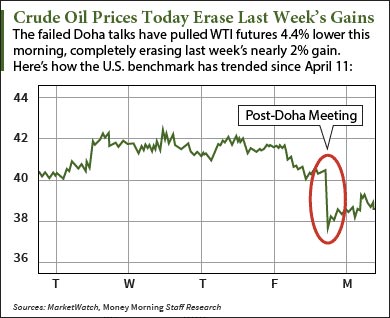 Why Crude Oil Prices Today Fell After the Doha Meeting

Crude oil prices are in a free fall today as investors panic following the Doha meeting.

Yesterday, more than a dozen of the world's largest oil-exporting countries met in the Qatari capital to discuss a deal to freeze output. The most notable attendees were Saudi Arabia, Russia, Venezuela, Algeria, and Nigeria.

But the mix of OPEC and non-OPEC nations failed to reach an agreement thanks to the ongoing conflict between Saudi Arabia and Iran. The Saudis refused to take part in the deal after Iran said it wouldn't freeze output.

Since the beginning of the year, Iran has ignored requests from the rest of OPEC to keep output steady. That's because the country wants to ramp up oil exports to 4 million barrels a day to make up for a decade of economic sanctions that halted oil revenue. With more than 157.5 billion barrels of reserves – the third most of any OPEC member – the country was sitting on a gold mine it could never profit from.

Now the Saudis are threatening to fight their main rival the same way they've fought all other competitors during the price crash – by pumping more oil.

But not even Saudi Arabia – the most dominant oil producer in the world – can afford to flood the market with more oil. 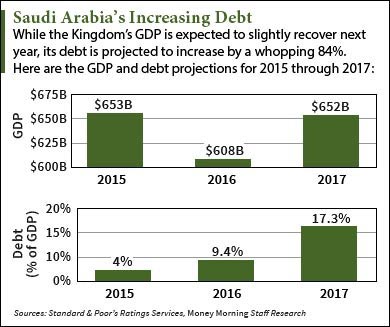 That's why S&P cut the OPEC leader's debt rating twice in the last six months. A national debt rating measures how risky a country's economy is for foreign investors. Successive downgrades make it more expensive for a country to borrow money on the global market.

With crude oil prices today back near those levels, the Saudi economy will struggle until the market fully stabilizes.

But Saudi Arabia is developing a strategy to completely get rid of its debt. According to Money Morning Global Energy Strategist Dr. Kent Moors – a 40-year veteran of the oil industry who's advised the highest levels of U.S. and Russian energy agencies – this plan involves indirectly selling its private oil wealth to the public.

"The country just announced a fundamental change in its strategy," Moors said on April 15. "Using its vast oil wealth, Saudi Arabia will create the single largest publicly traded stock in the world."

"Make no mistake. By giving the Saudis control over boardrooms worldwide, this new strategy will impact every single investor on the planet…"

Alex McGuire is an associate editor for Money Morning who writes about energy. Follow him on Twitter for all the biggest updates on crude oil prices today.