Oil's price crunch since late 2014, combined with the rapid growth in renewable energy investment, has OPEC countries scrambling to move away from relying on oil and natural gas.

Take Dubai and Abu Dhabi, for example. These cities, the two largest in the United Arab Emirates (UAE), now boast impressive skylines that show how important real estate, banking, and related industries are to the UAE.

Meanwhile, Qatar's capital city, Doha, is rapidly moving away from being "just" a center of the liquefied natural gas (LNG) trade, and is now intent on developing its own allure as a hub for both commerce and tourism.

"Diversify or die" is the new mantra. But so far, it's been unclear what Saudi Arabia, the driving force behind OPEC, plans to do.

The country just announced a fundamental change in its strategy: Using its vast oil wealth, Saudi Arabia will create the single largest publicly traded stock in the world.

Make no mistake. By giving the Saudis control over boardrooms worldwide, this new strategy will impact every single investor on the planet...

It is no secret that Saudi Arabia's largess of oil is approaching its end. Most officials in Riyadh, Saudi Arabia's capital, see a 30-year window before living off the country's oil wealth becomes untenable.

Now, the global energy balance will continue to include oil until at least 2100, especially in rapidly growing regions such as Asia. But oil's portion of the demand mix will begin declining by 2040 (or perhaps even sooner).

Saudi Arabia still retains immense reserves of oil and one of the cheapest production costs around. But that simply means that they will have a larger portion of what's likely to be a declining energy source by mid-century.

Just like the UAE and Qatar, Saudi Arabia will use its oil and gas surplus as a bridge to diversifying its economy. But where the other two Gulf countries chose global real estate and banking as their end targets, Saudi Arabia is aiming at something quite different...

The Most Important Man in Saudi Arabia

There is a new architect for this mission to end Saudi Arabia's reliance on oil, and he is quickly becoming the heir apparent among the next generation of the House of Saud, the Saudi royal family. If you can recall no other Saudi official, remember this one: 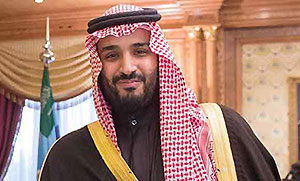 Mohammad bin Salman Al Saud will not reach 31 until August. But he is already the power behind the throne (which is currently occupied by his father, King Salman). Deputy Crown Prince, Second Deputy Prime Minister, chief of the royal court, and the youngest Defense Minister in the world, Mohammad has no shortage of titles - but he holds one more position, which from our viewpoint is even more important.

He is the chair of the Saudi Council for Economic and Development Affairs. That Council, in turn, will establish the Public Investment Fund (PIF), which will receive a windfall of at least $2 trillion from the initial public offer (IPO) of Saudi Aramco, the giant Saudi state oil company.

That $2 trillion, by the way, would come from a sale of just 5% of the company.

Mohammad's announcement earlier this year that just a portion of Saudi Aramco would be sold on stock markets set off a fury of market interest.

Initially penciled in for 2018, the IPO might actually go ahead a year earlier. In the process, equity exchanges worldwide will be transformed.

However, that may not be all...

More Privatizations May Be Coming

There are persistent rumors that Riyadh may be intending to gradually collateralize not only Saudi Aramco, but also the country's oil reserves. As excess global oil supply continues to create a ceiling for oil prices, this would present another way of getting value out of Saudi Arabia's vast reserves.

Anyway you look at it, Mohammad's PIF will come out of the gate as the largest investment fund in the world, even if no more of Saudi Aramco stock is offered and no collateralization of oil reserves is pursued.

Nonetheless, the PIF shows the diversification path the Saudis will travel. Whether PIF is to be regarded as a new type of sovereign wealth fund is less important than its sheer size: $2 trillion is not bad for a fund that at present has barely $5 billion in assets, mostly shares of Saudi domestic companies.

Once PIF receives the money from the Saudi Aramco IPO, it will be transformed into a massive investment engine that will target a full range of international investments, much of those in equity.

In other words, Saudi Arabia will leverage the value of its oil to diversify in a way quite different from its neighbors - it will create the largest stock investment portfolio the world has ever seen. Without diversifying what it produces, it will nonetheless acquire a quite diversified holding in dominant and emerging companies across the world.

Saudi oil will provide the base for Saudi control of boardrooms worldwide, both within and without the energy sector.

Nothing like this has ever been attempted before. Rockefeller, Noble, Rothschild, to say nothing of Gates, Buffet, and Soros, all pale in comparison.

If the Deputy Crown Prince pulls off the Aramco IPO, the Saudi PIF is going to transform investment markets as we know them, overshadowing any hedge, mutual, or holding fund in existence. Indeed, all of those will immediately become potential Saudi acquisition targets.

It seems the Saudis have found a way to keep their oil and diversify their economy at the same time.

Where the Oil Price "Yo-Yo" Is Heading Next: Oil prices have been moving up and down within a given range, seemingly without reason. But behind the scenes, the pieces are getting in place for crude oil prices to move up to $42 to $45 per barrel - soon. And that will give you plenty of opportunities...