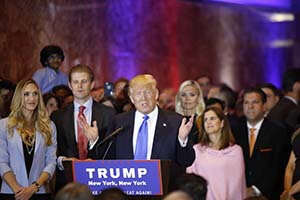 During a campaign rally in Indiana yesterday, the infamously bombastic billionaire said, "We can't continue to allow China to rape our country, and that's what they're doing. It's the greatest theft in the history of the world."

The comment likening China-U.S. trade relations to sexual assault sent off a media firestorm. Mainstream news outlets could not believe the real estate mogul would go so far.

While the comparison may be crass, it's also important to consider the source. Trump has long pointed to China's currency manipulation as a serious hindrance to U.S. businesses and exports.

And he's never minced his words about his problem with this - or much else.

"We're going to turn it around, and we have the cards, don't forget it," Trump promised at Sunday's rally. "We have a lot of power with China."

The real estate mogul also added that he is not "angry at China," but with U.S. leaders whom he accused of being "grossly incompetent."

How Trump Will Turn China-U.S. Trade Relations Around

In a campaign manifesto on his website, Trump pledges to "cut a better deal with China that helps American businesses and workers compete."

He outlines goals that include declaring China "a currency manipulator" and putting "an end to China's illegal export subsidies and lax labor and environmental standards."

Indeed, figures from the U.S. government show the annual trade deficit with China was at an all-time high in 2015...

But arguably more startling than that sum is the U.S.' debt to China...

As of January 2016, the figure was $1.238 trillion, reported Reuters on April 15. That's one-fifth of the $6.183 trillion in Treasury bills, notes, and bonds held by foreign countries. The rest of the $19 trillion debt is owned by either the American people or by the U.S. government itself.

Just last Friday, the U.S. Treasury placed China (and others) on a currency "watch list" to gauge whether the country provides an unfair trade advantage over America, reported Bloomberg that same day.

Donald Trump, however, believes Washington policymakers should likewise be on a watch list as well. Especially for allowing the U.S. indebtedness to China get so out of hand.

"Since China joined the WTO, Americans have witnessed the closure of more than 50,000 factories and the loss of tens of millions of jobs," states Trump's manifesto. "It was not a good deal for America then and it's a bad deal now. It is a typical example of how politicians in Washington have failed our country."

Meanwhile, don't expect the GOP front-runner to apologize or even change his use of aggressive language. "Once he stumbles upon a new incendiary turn of phrase, he tends to reuse it until he finds his next one," reported Slate this morning.

And that pattern seems to be working just fine for the former reality TV star. According to the latest Gravis Indiana poll conducted on April 28-29 (prior to Trump's commentary), Trump jumped to a 17-point lead over Sen. Ted Cruz.

"The Donald" now has 44 points in the Hoosier state, while the Texas senator has 27. A win in Indiana Tuesday could depress the front-runner's rivals' hopes of keeping him from the 1,237 delegate mark necessary for a Republican nomination win.

Uh, What Do You Need All That Oil For? China has been not-so-secretly stockpiling millions of barrels of crude oil. Investors and experts alike are wondering why China is hoarding the commodity at such a ravenous clip. Here's a look at the two main reasons behind the Red Dragon's stranglehold on the oil glut...

Did Donnie tell the truth AGAIN? What on earth does he think he is doing, running for president? What if the ones who are taking advantage of the Americans are displeased? There could be, you know, riots and stuff – not to mention the opprobrium from the honest and hard working geniuses in media. I say we must obey anyone who is burning, looting, obstructing, screaming, and being vulgar. Yeah, it'll be a new America, but change is good, right?