July was a banner month for major market averages. The S&P 500 passed 3,000 on July 10, and then the Dow Jones Industrial Average reached its highest point in history on July 15.

But Wall Street, the Federal Reserve, and Congress are all pointing to a potential 2019 stock market crash. 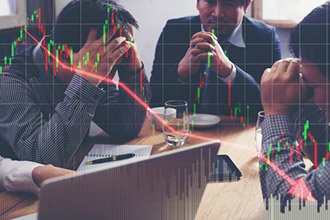 If you take a closer look, you'll find there are significant stock market crash warnings on the horizon.

Of course, a 10-year bull market makes everything appear hopeful.

The problem is that appearances can deceive investors. And deceived investors can lose their ability to perceive risk entirely, ignoring any stock market crash warnings coming their way.

When they least expect it, the market side-steps.

They'll say they never saw it coming. But the truth is, they could have. They just had to pay attention.

The New York Federal Reserve has a model that measures the probability of recession in the coming year.

Each time the measure has risen over 30% since 1960, a recession followed in fairly short order.

The New York Fed forecasts the model partly based on the spread between three-month and 10-year Treasury bond yields, known as the yield curve.

Whenever the line for short-term bonds climbs higher than yields on long-term bonds, the Federal Reserve views it as a signal of possible recession.

The Fed knows that an inverted yield curve has preceded every financial shock in the last 60 years.

Well, in just the past several months, we saw an inverted Treasury yield curve – the first to occur since the financial crisis of 2007.

One of the things an inverted yield curve signals is investor belief that future returns might drop. They're snapping up long-term bonds to protect against declining future returns.

Declining yields aren't just happening in the United States, either. It's a global phenomenon. In the United Kingdom, Japan, Germany, and Australia, yields on bonds have been dropping fast.

The moves indicate that investors globally are concerned about economic growth.

Which brings us to our next stock market crash signal…

The Chinese economy has seen robust growth over the years. Until recently, the nation had gradually increased its gross domestic product (GDP) and the concomitant rising standard of living. Because China is the world's second-largest economy, this was good news for the world.

But it's no longer the case. China's GDP fell almost 0.5% last quarter. That's the lowest reading in more than 27 years.

China has blamed this on its trade war with the United States.

He also forecasts that stock markets will drop below the levels reached in December 2018 – the Dow's worst week in 10 years – if the trade war remains in effect. That would signal the end of the bull market started in 2009.

But it isn't just trade war tensions emanating from the White House, either.