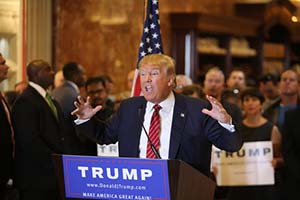 In an interview with Reuters on May 18, Trump said that some tech companies are valued at billions of dollars — but have never made any money.

"You have a stock market that is very strange," he said in the interview.

Trump isn't the first billionaire to warn against overvalued tech companies…
Microsoft Corp. (Nasdaq: MSFT) co-founder Bill Gates and venture capitalist and entrepreneur Mark Cuban have criticized what they call unicorns – private companies with weak fundamentals valued at over $1 billion, according to GeekWire.

Cuban also cited another reason for a stock market crash: Trump himself. Cuban told CNN on Monday he thinks with "100% certainty" that Trump will cause a big correction in the markets.

On the other hand, U.S. Federal Reserve Chair Janet Yellen emphasized that the U.S. economy isn't in a bubble back in April. Other economic and investment experts tend to agree, citing that stock prices, while high, aren't near the extremes of the dot-com bubble in 1997-2000, according to CNN Money.

Typically, it takes several factors at the same time for the stock market to enter a serious decline. For example, 9/11 was a major contributing event to the dot-com bubble.

Modernly, some of these factors could include: the economy falling into a recession, a Fed policy blunder, or a commodity price crisis, according to CNN Money.

This isn't the first time Trump has predicted a stock market crash or a tech bubble this year.

On April 15, Trump said that a stock market crash "will be coming" and that we're also in a big bubble. He also said that the United States was on track for a huge recession, according to CNN Money.

And back in October 2015, the presumptive Republican nominee echoed the same fears of a stock market bubble to The Hill.

On May 12, Money Morning's D.R. Barton, a 28-year technical trader and celebrated financial coach, told FOX Business viewers how a Trump versus a Clinton presidency would affect markets. Here's that full segment:

Do you think we're in a tech bubble, or that a stock market crash is near? Tell us on Facebook or Twitter.

See the inflation-adjusted Dow, thru yesterday, May 20: