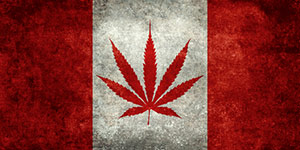 And if recreational marijuana is legalized in Canada, it will be a boon for the government and investors alike...

According to data from the Canadian Imperial Bank of Commerce, marijuana legalization in Canada could generate as much as $5 billion for federal and provincial governments. [Editor's Note: We'll have more on investing in marijuana in just a bit...]

With billions in potential tax revenue in mind, Trudeau began the effort to legalize recreational marijuana in Canada on Nov. 13, 2015.

Here's a look at the actions he has taken...

Trudeau released a ministerial mandate letter (an outline of what the government needs to accomplish) to the public, an unprecedented move, according to Toronto news site thestar.com.

In the letter, Trudeau told his ministers they would need to work towards legalizing and regulating marijuana in Canada.

Then on April 20, 2016, Health Minister Jane Philpott announced Trudeau's first steps for legalization. At a United Nations General Assembly session in New York, Philpott said that legislation for legalizing marijuana in Canada would be introduced in the spring of 2017.

According to the webpage for the Liberal Party of Canada, Trudeau has three focuses for introducing recreational marijuana use to Canada: legalize, regulate, and restrict access.

And according to a survey conducted by Nanos Research/CTV News between May 27 and June 1, the majority of Canadians are in support of Trudeau's plans for marijuana legalization in Canada... 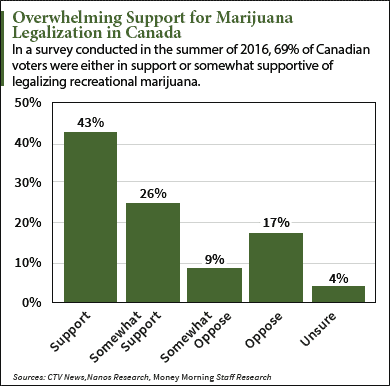 Only 9% were somewhat opposed, and 17% were opposed.

Although Trudeau is pushing for recreational legalization and Canadian citizens appear supportive, he doesn't want to decriminalize marijuana immediately.

Currently, marijuana is only legal in Canada if it's used for medical purposes.

Marijuana can be used to treat conditions for:

But police departments and prosecution services in all Canadian jurisdictions have the authority to pursue criminal charges against those in possession of marijuana without a medical prescription.

And Trudeau isn't going to decriminalize marijuana possession for one key reason...

According to CTV News, Trudeau said he opposed giving a legal stream of income to criminal organizations.

Canadian citizens are split on the current laws. According to the survey, 40% believe the police should continue to enforce current laws until they change, while 39% either somewhat disagree or disagree.

While decriminalization may not happen now, it's still only a matter of time before Canadian marijuana laws are changed forever...

Money Morning Director of Tech & Venture Capital Research Michael A. Robinson told me on Nov. 15 that there is too much conjecture right now on the timing of when recreational marijuana use would be legalized in Canada.

However, he also told me he thinks a vote for recreational marijuana use in Canada will pass...

Robinson says the industry has a lot of momentum because of recent legalization in large U.S. states like California.

And that's great news for investors...

That's because with more states in the U.S. legalizing recreational marijuana use and the upcoming Canadian legalization initiative, you can start to plot your course to a seven-figure weed windfall with the top pot stocks from every ecosystem - growers, edibles, dispensaries, and more...

The Initiative to Legalize Marijuana Is Growing Rapidly...