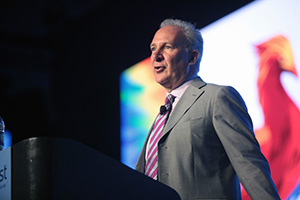 In his latest podcast, Euro-Pacific Capital CEO and controversial contrarian investor Peter Schiff made a bold prediction about the House Republicans' latest plan to replace the Affordable Care Act:

You see, Schiff thinks the new plan -- dubbed "TrumpCare" by the Republicans on Capitol Hill -- is just going to be "another disaster wrapped up in a different package" for the American people.

While some supporters of the new plan have lauded the House Republicans' effort to please both parties and not scrap Obamacare entirely, Schiff claimed on his podcast their new replacement was just a product of politicians who "don't have the guts" to stand up to voters.

For example, Schiff criticized the GOP for keeping the pre-existing condition mandate with a dose of his own arguably contentious logic: "The insurance companies can't discriminate against you if you're sick? So why buy insurance if you're healthy? Just wait until you get sick!"

In fact, in an ironic parallel to this logic, the GOP did outline a way to deal with the fact that many people might not buy insurance if they don't have to until they're sick...

The Subsidy Specifics of TrumpCare

First, it's important to understand how TrumpCare subsidies are intended to (theoretically) work...

Under the GOP's new plan, the government will give you an annual check for a sum anywhere between $2,000 and $14,000 - depending on your age and family status -- to put towards health insurance. As you get older and perhaps build a family, this tax credit will increase.

If you don't spend all of this money each year, then under TrumpCare you can pocket it into a health savings account, or HSA.

In theory, this should help Americans save money for health expenses later on down the line.

However, Schiff argued this week, TrumpCare's subsidy plan (which he referred to as "handouts") is actually going to turn into a huge cost for Uncle Sam.

Especially once consumers catch on to how they can work the system...

Peter Schiff: Nobody Will Buy Insurance Until They Need It Most

"The reason that costs are not going to go down is because healthy people are not going to buy insurance - there will be absolutely no reason to!" said Schiff, echoing the same complaint the GOP and insurance companies alike have been lodging since the ACA was first enacted in 2010.

"For example," said Schiff, "You're a healthy guy in your twenties. The government gives you a $2,000 check to buy insurance. As long as you can buy insurance for less than the amount of the subsidy, you will."

"But, as soon as the insurance becomes more expensive than $2,000 -- which it will - and you're healthy, you're not going to buy it!" Schiff pointed out.

To attempt to solve this very issue, the GOP's new plan allows insurance companies to charge a 30% premium if you switch plans and suffer a lapse in coverage.

This would (theoretically) ensure that people don't cancel their insurance plans when they are healthy only to sign back up again when they get sick.

Here's the problem with all that, according to Peter Schiff...

"[The insurance companies] charge you a 30% premium [if you switch plans]. However, you still get your $2,000 a year from the government to pay for it!"

Once people figure out that they can game the system by paying for the 30% premium penalty with the money Uncle Sam gave them, there'll be no stopping the "waste, fraud, and abuse."

The radio personality then touted his own solution to the GOP's Obamacare replacement plan...

Schiff first referred back to a broadcast from earlier in the year, when he originally claimed that America should just "get rid of Medicare and Medicaid."

In his latest broadcast, Schiff added an addendum to his proposal...

"Here's my idea," he said. "If you decide that you aren't going to buy insurance, instead of putting all of the money aside for the future, how about you buy a policy that basically says, 'If you ever need health insurance, if something ever goes wrong, this policy will pay you enough money to pay your premiums.'"

Schiff summed up his idea by claiming, "You just need insurance to buy health insurance in case you get sick."

What do billionaires Peter Lynch, President Trump, and a retired cop from Northridge have in common? They've all benefitted enormously from a curious Great Depression-era "program." And even though most have no idea this exists, it could be worth $68,870 or more to the average American. Continue reading...