[Tokyo] - A new kind of car company is coming to town.

It's got a better sales model, better technology, and a dramatically lower price.

Here's what it means for the automotive industry and how to profit.

A Death Blow to Detroit

If you've followed my work for any length of time, you know what I think about Detroit.

I don't make those comments lightly, either.

There's nothing I love more than the roar of a big block V-8 and the feeling you get when you're squashed in your seat as it takes off. Nobody does that better than the Motor City.

But that doesn't change the fact that what's coming down the road is an absolute game changer. Or, more precisely, who.

You're not alone - but that's going to change.

I've been tracking the brand for years and first brought it to readers' attention in Money Morning and in our trading services starting in late 2007 almost immediately after assuming my role as Chief Investment Strategist directly from China, where I was travelling with subscribers at the time.

Then, I told readers about it again in Money Morning, when I addressed rumors Geely was preparing to buy Volvo from Ford Motor Co. (NYSE: F) (it did so in 2010). Wall Street dismissed the transaction as a non-event at the time, as did most investors who couldn't think beyond the Financial Crisis roiling markets. "What a mistake," I counselled in presentations around the world.

Having spent a lot of time in mainland China, I'm intimately familiar with how fast knowledge gets assimilated, "Chinafied," and brought back to market, often at far higher quality and far lower cost.

I believed that Geely would quickly absorb Volvo's technical expertise and design savvy to field a global category killer and take only a few years to do it. Moreover, I also believed based on first-hand experience that the company wouldn't stick to China as many Western analysts arrogantly believed.

Geely debuted a stunning compact SUV in Beijing last week that it calls the 01, along with a compact hybrid sedan that it aptly calls the Concept Car. 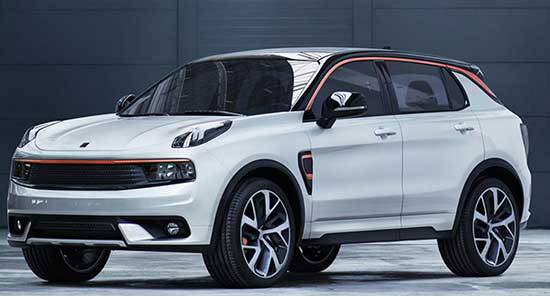 The car is built on the same Compact Modular Architecture that Volvo uses for its most advanced vehicles. Company sources suggest that the SUV will be powered by an inline 3 or 4, and that there will be plug-in options.

Here's where it gets interesting for everybody else and very profitable for you.

The 01 will be sold through a newly created global brand called Lynk & Co., and every vehicle will be constantly connected to the internet - hence the name... Lynk, which is pronounced "link" - get it?

That means Lynk cars will be able to communicate with each other and Lynk central regarding everything from traffic conditions, maintenance requirements... even how many parking spaces there are at your local supermarket.

To dismiss this as a Chinese offering like most western investors are going to would be a huge mistake.

All the right players are involved here - Microsoft, Alibaba, and Ericsson are supplying the "brains," for lack of a better term. The 01 may out-Tesla Tesla, if that's possible in terms of connectivity.

This is where Detroit and its high-priced labor contracts and legacy costs will get into serious trouble. The 01 and all Lynk & Co. vehicles are going to be priced above Geely's traditional budget line but below Volvo. My guess is Lynk will land a fully equipped vehicle on our shores for less than Detroit can even produce a comparable offering.

We won't have to wait long to see if I'm correct.

Lynk has four models in the pipeline, and the 01 will come to market in China next year. A European launch is slated for 2018 and potentially the United States shortly thereafter or even concurrently.

So here's how you play the situation.

I belive this is the future of all Vehicle.