Although it's too early to know for sure, Friday's action suggests we could be seeing the earliest stages of a carry trade reversal. Remember that hedge funds and other highly leveraged institutional investors have been borrowing here in the United States at ultra-low interest rates, selling the dollar short, and using the proceeds to snap up stocks, bonds, and gold.

Stocks rocked and rolled on Friday as traders reacted to a better-than-expected jobs report for November. Payrolls dropped just 11,000 and the unemployment rate fell to 10%. The consensus was expecting a payroll drop of 100,000 and the unemployment to remain at 10.2%. Sure, employers still made cuts. But by all indications were on the cusp of a job market turnaround.

An initial early morning blast took small cap stocks up as much as 3% before sellers emerged. The main concern was that a strong economy will force the U.S. Federal Reserve to drop its easy money policy that has it purchasing some $3 billion in mortgage-backed securities (MBS) per day while keeping short-term interest rates pegged near zero. The futures market now pegs the probability of an interest rate increase by August 2010 at 100%.

Employers in the United States still made cuts in November, but by all indications were on the cusp of a job market turnaround.

Some of this volatility could now be unwinding. The PowerShares DB Dollar Index Bullish exchange-traded fund (NYSE ETF: UUP) gained 1.5% and broke out of its nine-month downtrend. Gold lost 4.2% in what was its largest one-day loss since January. The iShares MCSI Brazil Index (NYSE: EWZ) ETF lost 1.2%. And 10-Year Treasury notes lost 1.6%. The tight cross-asset correlations we've been seeing, in which stocks, the dollar, gold, and bonds all moved in lockstep, are probably coming to an end. 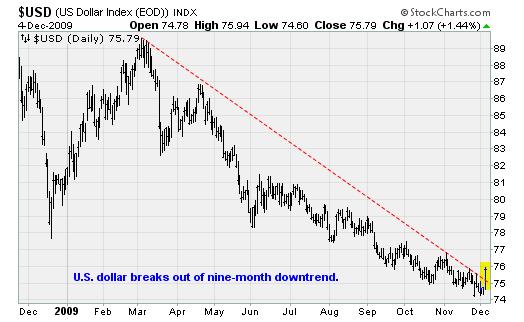 These shifts will happen as traders prepare for the inevitable hike in interest rates as the Fed mops up all those extra dollars it's been printing now that the jobs recession is ending.

The end of the carry trade isn't necessarily a terrible development. And it's not the only motivation for buying or selling stocks in the world. But it has something that has been playing an important role in the markets lately – so let's take a quick look at what's likely to happen as it fades into memory.

The relationship between stocks and the dollar hasn't been very significant. Stocks rose throughout the late 1990s as the dollar climbed. And stocks climbed between 2003 and 2007 as the dollar fell. 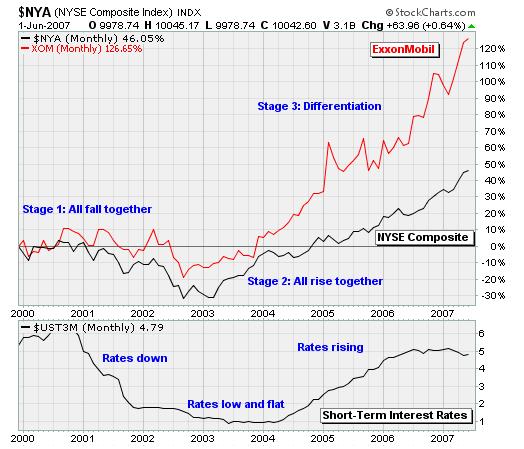 So, interest rates will be the real driver going forward. And as you can see in the chart above, the cost of short-term money has had a significant influence on the broad market earlier this decade-- with the Standard & Poor’s 500 Index performing best in environments where interest rates are low and stable. This is what helped push stocks up 63% since the March low.

Rising rate environments like the one we'll have next year have been associated with more modest returns. However, as ExxonMobil Corp. (NYSE: XOM) demonstrates, individual stocks with exposure to whichever industry is leading the economic growth cycle can significantly outperform.

Another way to view interest rates is to consider the lifecycle of a bull market. They are born in the cold of winter, when rates are low and expectations for the future are even lower. This happened in March. When young, toward the end of the low rate period, all risky assets will participate in the rally with riskier, low-quality stocks performing best as the threat of bankruptcy and failure passes.

Springtime then blooms, businesses become more optimistic, hiring commences, and interest rates start to rise. Stock performance starts to become more differentiated. You can think of this as the mating season: Only the strongest and most capable companies will attract investor attention as cash become scarcer. Fundamental stock analysis returns to the forefront. This is where we're headed.

To close with another metaphor, a carry trade environment that results from low interest rates and a deprecating currency act is like investing with a shotgun. You can be a terrible shot but you'll still probably hit something as long as you get out of cash. In a rising rate environment, it's like trying to knock down a rabbit on the run at 50 yards with a varmint rifle. You'll have to take your time, measure your breathing, and concentrate.

The best way to play this is by maintaining broad exposure to stocks via a low-cost ETF like Vanguard Total Stock Market (NYSE: VTI), avoiding bonds, and focus on the specific sectors and companies that are demonstrating relative strength. For the latter: My proprietary StrataGem stock selection model I developed while at Microsoft Corp. (Nasdaq: MSFT) and harness for the benefit of Strategic Advantage subscribers accomplishes this task.

Volume jumped 39% in what was the NYSE's most active session since late October. Buying intensity was somewhat lackluster given the awesome news from the jobs market: Up volume accounted for just 68% of total volume. 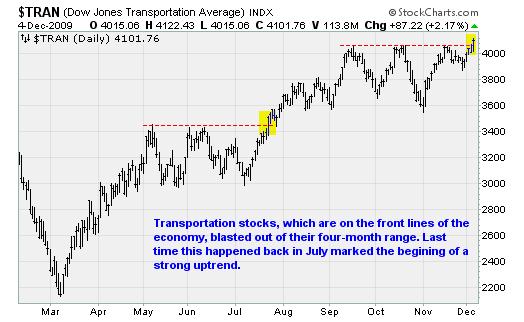 BofA sold 1.3 billion shares on Thursday to support the $45 billion repayment of government bailout funds. This increased the company's weight in the S&P 500, which is based on market capitalization (shares outstanding multiplied by share price). This set off a wave of buying by index funds that closely track the benchmark. The action in the rest of the sector was subdued but still healthy. JPMorgan Chase & Co. (NYSE: JPM) gained 0.8% while Citigroup Inc. (NYSE: C) gained 0.3%.

Sales growth will be the next big catalyst for stocks. For companies that have cut costs to the bone by slashing traveling expenses, advertising budgets, and employment levels, such a boost will have a dramatic effect on profitability – with profits rising as much as 40% in 2010 by some estimates. According to FactSet Research Systems Inc. (NYSE: FDS), the consensus expects sales for S&P 500 components to increase 6.2% next year after falling 8.1% in 2009.

My research suggests a double-digit increase in sales is not out of the question once job growth returns early next year. When this happens, consumers who have been scrimping pennies since the recession started in 2007 will start spending again. People can only delay purchases for so long before the washing machine or the refrigerator or the family car will need to be replaced. It's frugality fatigue! 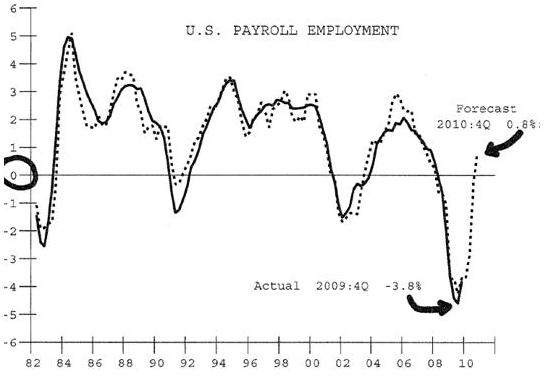 Analysts at the ISI Group Inc. expect employment to increase 0.8% next year based on a model that considers the lagged effects of increased profits, lower energy prices, higher household net worth, low interest rates, and the credit bull market encourage companies to start hiring. You can see this illustrated in the chart above.

We're on the verge of a turn in the jobs market. And this, in turn, will feed a rise in sales and an earnings surge for the corporate sector. Once this happens, we'll see a virtuous cycle start in which more hiring will result in more sales, which in turn will result in more hiring. While this scenario may seem farfetched, history suggests it's just around the corner.

Monday: The Chicago Business Barometer increased to 56.1 in November, up from 54.2 previously and ahead of the 53 consensus estimate. This was the highest level since August of 2008. Gains in new orders led the result. The survey is a fairly strong predictor of industrial production, so this bodes well for manufacturing employment.

Tuesday: Auto sales continued to rebound in November. Domestic sales increased to an 8.2 million annual rate -- up from a 7.9 million annual rate in October. The ISM Manufacturing Index slipped slightly to 53.6 from 55.7 previously. This was also below the 55 consensus estimate but is still above 50-- which indicates an expansion in activity. There was some good news as well: The new orders sub-index moved back over 60.

Thursday: November chain-store sales were a bit weaker than expected. Weekly jobless claims continued to fall, beating expectations by 28,000 by dropping to 457,000.The ISM Non-Manufacturing Index of activity unexpectedly dropped to 48.7 in November -- indicating a slight contraction for the services sector last month.

Friday: The November jobs report soundly beat expectations. Philippa Dunne and Doug Henwood of the The Liscio Report, who are both veteran watchers of the job market, said that the report was "the best since December 2007" with only a few blemishes under the surface.

Those reported to be in temporary employment, which is a leading indicator for permanent job creation, increased by 52,000. This was the fourth monthly increase and the third-biggest rise since the data started being collected in 1990. September and October payrolls losses were downwardly revised by a net 159,000 jobs. And finally the hourly workweek, which is also a leading indicator, is increasing at the fastest rate since early 2007.

Monday: An update on consumer credit. Households have been de-leveraging, or paying off debt, as record debt-to-income levels slowly come back down. A higher than expected number could be a negative catalyst since it takes away from the critically important holiday shopping season.

Thursday: The U.S. trade balance will be reported. Watch for a smaller trade deficit, since it will provide a boost to fourth-quarter gross domestic product (GDP) growth. Weekly jobless claims will be reported.

Friday: We'll get an update on retail sales, consumer confidence, and business inventories.

[Editor's Note: For the first time in 70 years, U.S. T-bills are paying 0% interest, while U.S stocks are continuing to rise. According to Bloomberg News, this last happened in 1938, when T-bill yields fell from 0.45% to 0.05%. Then came 1939, when stocks began a three-year slide that took the S&P down 34% after the U.S. Federal Reserve prematurely boosted borrowing costs to battle phantom inflation.

Very few market columnists see the parallels. And even fewer see the differences. But as this column demonstrates, veteran portfolio manager, commentator and author Jon Markman sees it all. And that's why investors subscribe to his Strategic Advantage newsletter every week.

Thanks for your valuable insights. I agree with your comment about springtime being a new beginning for businesses and fundamental analysis becoming prominent again.

I have your book "Online Investing" and have used the MSN MONEYCENTRAL'S Stock Screener which allowed you to do customized searches. It looks like it is no longer available on MSN MONEY CENTRAL. Is this search engine available anywhere online?