Silver prices today (Monday) are up slightly with a 0.24% gain in morning trading. Volatility has remained the hallmark for silver prices this past week and past month.

Slow summer trading, supportive macroeconomics, and a strong U.S. dollar have all been factors in the price of silver's volatile ride.

Still, we've seen the silver price trade in a well-defined range since the start of July. In the near term, I think we're going to continue witnessing a continuation of choppy trading.

Stocks setting new highs could attract some capital away from precious metals, but I wouldn't expect that to have 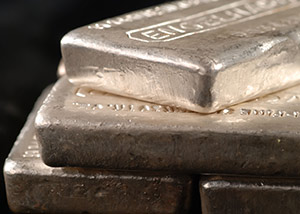 too major of an influence.

Otherwise, news stories like Friday's lower than expected retail sales will be enough to move silver prices 1% or more in either direction.

Before we get into our silver price outlook for 2016, here's why silver prices were so volatile last week…

The price of silver followed a similar pattern on Tuesday, opening at $19.63 before closing slightly up at $19.80.

But the real action for silver prices came soon after.

Within a couple of hours after the New York market closed, the price of silver per ounce began to rise dramatically through the night and into the early morning. By the 8 a.m. open, silver was already at $20.31, and it peaked shortly after by 9 a.m. at $20.36.

The most logical explanation for this price behavior was the action in the U.S. Dollar Index (DXY). Here's how that looked over the last five days: 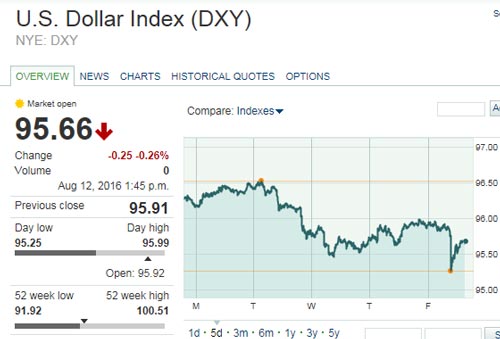 You can see the precipitous drop in the DXY late Tuesday into early Wednesday. That was a 100-basis-point drop, which is quite significant for any currency, but especially for the U.S. dollar. For all intents and purposes, the U.S. dollar is basically the world's reserve currency.

On Thursday, as the DXY regained a bit of ground, the silver price started to back off. It opened at $20.09 and fell on balance to close out at $19.90.

Related: This Chart Shows How Negative Interest Rates Affect More Than You Think

Volatility reared its head again on Friday. After early morning weakness, silver prices opened stronger at $20.13, but that was surprisingly short-lived. By 12:00 p.m., the price of silver was heading south and by mid-afternoon was down to $19.63.

As it turned out, Friday was a perfect example of the choppy trading I mentioned we could expect from silver prices today and for at least a few more weeks.

And if we look at a silver chart, we can see that like gold, it seems to be losing momentum, according to the MACD indicator. 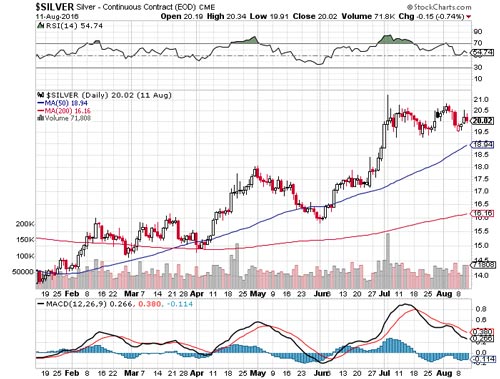 The declining MACD, which indicates the divergence between the shorter- and longer-dated moving averages, suggests that silver's upward move is likely slowing.

If we couple that with the most recent Commitment of Traders (COT) report, which shows silver hedgers holding their largest net short position ever at -109,121, I'd expect that to work against silver's favor near term.

For these reasons, I still see near-term downside risk for silver prices today. But if we look beyond, say, the next several weeks, all the macro and fundamental indicators remain supportive of higher silver prices.

Editor's Note: The economy during Bill Clinton's presidency is remembered as booming. But that couldn't be further from the truth. Here's why it's a dangerous myth…