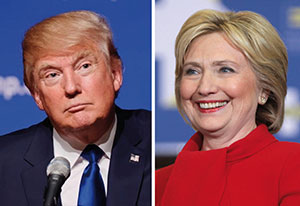 And part of what propelled him this far has been his increasingly harsh stance on China...

Since he first announced his bid for candidacy on July 16, 2015, Trump has focused much of his campaign rhetoric on the U.S.' largest trading partner. In January, he proposed that tariffs on imported Chinese goods be increased to up to 45%. In February, he accused the large Asian nation of poaching American jobs and manipulating its currency. And just this past Monday, the real estate mogul made his most inflammatory remark about the country yet: He accused China of raping America.

China has mostly shrugged off all this harsh criticism -- though the country did actively stress the importance of the U.S.-China trade relationship after Trump took Nevada earlier this year.

Now, China has once again publicly stressed how crucial this relationship is: "What needs to be pointed out is that the essence of Sino-U.S. trade and business cooperation is mutually beneficial and win-win, and accords with the interests of both sides," Chinese Foreign Minister Hong Lei said in a daily news briefing, according to Reuters earlier today.

But China's Xinhua News Agency expressed a different - rather surprising - take on Trump's upset in Indiana...

Reacting to Trump's decisive Indiana win this morning, Xinhua released a news analysis of its own.

The Chinese publication proclaimed Trump "could actually win the thing," if he'd just tone down his rhetoric.

"Analysts say that the only one who can beat Trump is Trump himself," Xinhua reported. "While he has galvanized the Republican rank and file like no other Republican candidates in recent years, he is also vehemently disliked by many outside his base."

But we found Xinhua's comments on the "celebrity" of Democratic front-runner Hillary Clinton its most interesting take...

"Despite being a celebrity outside the United States," the news agency wrote, "Clinton, the former first lady and secretary of state, simply neither excites nor galvanizes her base."

That jab against Hillary Clinton may seem surprising. Unlike Trump, Clinton hasn't been as brash and vocal about criticizing China in her 2016 presidential election campaign.

But that's only because she didn't need to be. The damage was already done...

Clinton, you see, has a long - and fairly negative - history with China, dating back to her time as first lady. In 1995, she gave a provocative speech on human rights in Beijing at the UN World Conference on Women and declared that "women's rights are human rights." Fourteen years later, when she assumed office as secretary of state, Clinton was still proud of that moment. She even listed it in her official State Department biography. The incident left a lasting negative taste in China's mouth for having been embarrassed on the world stage.

Her comment lead many to believe that China's nine-dash line, which encircles almost all of the South China Sea, is not a "legitimate claim."

In fact, China's then-Foreign Minister Yang Jiechi was so reportedly angered by Clinton's statement that he walked out of the conference.

Save Puerto Rico... Ahora! Congress has yet to make a final decision on how to deal with Puerto Rico's dire debt crisis. Unfortunately, if the government continues its streak of inaction, the burden will fall on taxpayers' shoulders. Here's what needs to happen... and fast...