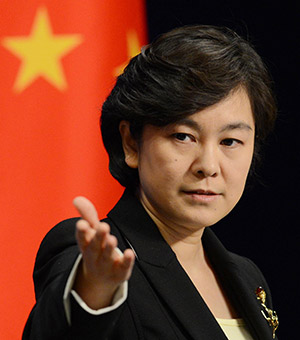 China's Foreign Ministry spokeswoman Hua Chunying told reporters in Beijing that "we are following with interest the U.S. presidential election."

China warned the United States on Wednesday not to adopt punitive currency policies that could disrupt U.S.-China relations. The Red Dragon's cautionary advice came after GOP favorite Donald Trump won Nevada's caucus with a landslide 45.9% of the vote and 14 of its 30 delegates.

In a statement made overnight, China's Foreign Ministry spokeswoman Hua Chunying told reporters in Beijing that "we are following with interest the U.S. presidential election."

Hua was asked about China's response to a potential Trump presidency and his plan to impose 45% tariffs on imported Chinese goods.

"Since it belongs to the domestic affair of the U.S., I am not going to make comments on specific remarks by the relevant candidate," she said, according The Washington Free Beacon earlier today. "But I want to stress that China and the U.S., as [the] world's largest developing and developed countries, shoulder major responsibilities in safeguarding world peace, stability, and security and driving world development."

Hua's comments also likely alluded to the importance of maintaining a peaceful relationship with the United States as military issues escalate in the South China Sea. Her statement comes a day after Wang Yi, the Chinese foreign minister, held talks in Washington with Secretary of State John Kerry on the intense maritime dispute.

Hua said Wang and Kerry agreed that both the Unites States and China will improve cooperation over the matter.

Meanwhile, Trump has said he would like to bolster the U.S. military and "deploy it appropriately in the East and South China Seas," according to his website.

Seven Nations, One Sea: A storm that's been brewing in the South China Sea for 200 years now threatens to disrupt the world's financial markets. Exactly what is the South China Sea dispute? Here's the historical context that lends perspective to this contentious territorial conflict...

Who cares what China has to say. They can kiss my grits!

China has been playing us for suckers for years now. The time has come to tell the Red Dragon we are sick of their games. Ignore their threats.

It is a pity that a lot of a people in US do not understand that they have borrowed a hell of money from China so they living on their premises.

The cheap export to West led boom in Chinese economy in 1990- 2010 has caused to \millions of rural chinese to ghettos in cities as cheap labour. Now with slow down of Chinese economy , these unemployed and ghettoised chinese labour are threat to Chinese communist party. Usual Chinese medicine is war mongering, patriotic sloganeering as they did earlier with India,Vietnam, Japan and other neighbours. Be aware neighbours of China, danger ahead for you.

Blue Eagle to Red Dragon: We are #1 and will always be #1 in Asia and around the world.

Protectionism is not the solution; neither is war mongering. "This sucker's going down," and there's nothing anyone can do about it, except possibly delay the inevitable and necessary collapse of the unaccountable, non-elected authoritarian global Central Bank regimes aiding and abetting bankrupt governments and their overseers in securing a "legal" means of acquiring the proletariat's wealth to further facilitate their stealthy pursuit of global domination and enslavement.

China is not the enemy. Look around, the enemy is us. Paramilitary police, Big Brother scanning all personal communications, travel restrictions imposed by intimidation, cashless proposals, negative interest rates, Citizens United, etc., etc., etc. As a citizenry, we are not bearing the burden of democracy. We buy-in to the crock of political and economic propaganda promulgated by TPTB. Why? We lack the political and intellectual capital to counter their 24/7 onslaught of mind control. Schools across America are collapsing, teachers laid off, curriculum gutted, school days reduced. All this transpiring while we send F-22s, aircraft carrier squadrons and military "advisers" to the Middle East to "help" who-knows-who with $billions of federal tax dollars flowing into the Industrial Military Complex daily.

There is SO much wrong with the world right now, but China is merely seeking a full place setting at the table of advanced Western economic prosperity, not confrontation. It's our own government, puppets of TPTB, that is primarily responsible for much of the ME and global political instability, and the larger economic and monetary bomb threatening our own economic meltdown. Every nation's people has the right to a fair and equal opportunity at prosperity, to live a life without disease, famine and violence imposing unnecessary hardships. We must embrace our fellow human beings striving for a better life. This is not a zero-sum game. We do not lose if they prosper. It is the responsibility and challenge for developed nations to enable and secure global peace and prosperity.

Bretton Woods was necessary at the time, but the rest of the world has grown weary of the U.S. government's poor husbandry of this enormous privilege and responsibility. The continued deception of portraying Americans as innately superior, thus affording an unmerited exorbitant lifestyle is failing before our eyes. Our system still barely affords the most innovative and hard-working among us to make gains against the welfare state's socialist policies, but once the USD has been stripped of its premier global currency reserve status, there will be no one to buy the USG debt and the unsustainable lifestyle afforded to many will disappear. Simultaneously, most nations will avoid trading in dollars like the plague. We won't have to worry about trade barriers. We have already erected them. Over the last half-century, our military and "black ops" intrusions into other countries' internal affairs in the name of freedom and democracy (spelled P-R-O-F-I-T-S) and the subsequent coercion and bribery of their newly implanted leaders has alienated our global brothers and sisters. I fear most will enjoy our comeuppance. Even Canada and Mexico are already re-aligning trade channels to better facilitate doing business sans the dollar.

I suspect many readers will summarily dismiss and even denigrate my opinion, but in our heart-of-hearts, each of us know this to be true. Our system is corrupt. It NEEDS us. Americans must clean up our own nation's affairs before arrogantly imposing our will upon others as the "right" way. China has 1/3 of the world's population. They are one with us. We are all one. There is no "us" and "them." There is only the Unity Consciousness.

Best advice I can offer, though admittedly no one asked, is to look around your neighborhood and start identifying those with whom you want to build an alliance for survival. It is going to get ugly. A Unity perspective will help.

Thank you for the clarity.
I agree in total!

then move to China

The "GOLDEN RULE" has been been ignored to our ultimate degeneration !
'Treat others as you would like them to treat you'!
Unrestrained EGO of self and country is leading us into self-destruction. Many comments here prove our attitudes are suffering a need for adjustment and it looks like this will come from our riding our 'high horse' to death, rather than a common sense dismount!
Prime candidates in the race are posing to this mentality.
College educated idiots are in oversupply. Self-preening replaced self-preservation long ago. It's unfortunate that foolishness rules over wisdom. We have over- costumed the earth's wealth long enough. It's due time now for the inevitable end of this wasteful gluttony.
Our power and wealth, as other nations before us, will be historically marveled, and the simple solution truths so arrogantly ignored will be our sad demise!!!

Chinese government can't make any threats because they need the US to keep their economy going. Their problem, just like the USA is their huge overspending and waste of money and now that they are feeling the crunch, they want to make demands of sorts. Keep your demands to yourselves. You don't make policy here.

It is ALL about us verses them. Long b4 we and anyone else are on equal terms there will be a third world war. Have no doubt of that. Quickly followed by a civil war. I am prepared are you? Will you stand up for your country or go meekly to stand against a wall to be shot? I am an old man, but I WILL FIGHT and kill or be killed ,proudly, any foreign OR domestic that threatens this country.