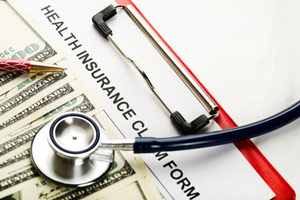 This week the GOP healthcare plan has again come under heavy fire -- and not just from Democrats.

Some damning numbers in a Congressional Budget Office (CBO) report released Monday set off a wave of Republican criticism as well.

And while Secretary of Health and Human Services Tom Price denounced the CBO report as "incomplete" -- suggesting it doesn't account for additional regulatory steps and other pieces of healthcare legislation Republicans are crafting -- none of that will matter in the court of public opinion, which is focused on the CBO numbers. As the designated non-partisan interpreter of congressional laws, the CBO's numbers will carry a lot of weight in the AHCA debates to come, regardless of their accuracy.

The parts of the report that sparked the most dramatic reactions had to do with a rapid escalation in the number of uninsured under the GOP healthcare plan as well as a bizarre structure for premium assistance that would have some paying more than eight times what they do now.

The CBO's 10-year projections on the Republican-written bill known as the American Healthcare Act (AHCA) arrive as the battle over replacing the Affordable Care Act, also called Obamacare, enters a make-or-break phase.

What has Republican critics most concerned is the CBO's projections for how healthcare insurance costs would change for single individuals in three age groups.

Democrats were quick to jump on one headline number in particular - that 14 million more people would be uninsured in 2018 under the GOP healthcare plan than under the current law, a figure the CBO said would rise to 24 million by 2026.

"The CBO score shows just how empty the president's promises, that everyone will be covered and costs will go down, have been," said Sen. Chuck Schumer (D-NY), the Senate minority leader. "This should be a looming stop sign for the Republicans' repeal effort."

During the campaign, President Trump vowed that once a GOP healthcare plan was in place, "you'll see rates go down, down, down, and you'll see plans go up, up, up."

It was no surprise that Democrats, intent on defending one of President Barack Obama's signature achievements, would use the CBO report as ammo in their fight to thwart the AHCA.

But the negative reaction from a range of Republicans is a bad sign, representing a mortal threat to the GOP healthcare bill....

The Republican Party has campaigned for seven years on repealing and replacing Obamacare. Now the CBO report is tearing at the party's unity at the worst possible time.

A scenario in which 21 or more Republicans in the House of Representatives vote against the bill would kill it. So far 13 GOP representatives are against it.

The margin for error in the Senate is even more precarious. Republicans hold 52 seats and need at least 51 votes to pass the legislation.

Some Republicans were complaining about the GOP healthcare plan even before the CBO report came out.

The most conservative wing of the party is concerned the AHCA legislation will cost too much, relies too heavily on tax credits, and leaves some elements of Obamacare in place.

The CBO report, with its eyebrow-raising figures on premium increases and millions without coverage, gave pause to more moderate Republicans as well as strong Trump supporters who view the GOP healthcare plan as a betrayal of the president's campaign promises.

"I plan to vote NO on the current #AHCA bill," Rep. Ileana Ros-Lehtinen (R-FL) tweeted on Tuesday. "As written the plan leaves too many from my #SoFla district uninsured." 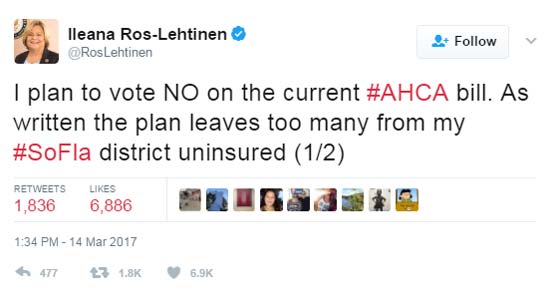 Sen. Susan Collins (R-ME) called the CBO report "cause for alarm" and said it "should prompt the House to slow down and reconsider certain provisions of the bill."

What has Republican critics most concerned is the CBO's projections for how healthcare insurance costs would change for single individuals in three age groups.

This chart tells the tale...

This Is Why Republicans Are Running from the GOP Healthcare Bill

This is a big problem and I can't believe they are doing this bill in weeks. Just to satisfy their own schedule of what needs to be done, on their time frame. We have been put on a slippery slope. What are we becoming? Mildred
Question: What is this bill passed in '82 that will effect our IRA's?