Last week when the Obama administration announced that Obamacare premiums would rise an average of 22% for 2017, officials offered words of reassurance.

The steep Obamacare price increases aren't a problem, they said, because the majority of people who have healthcare insurance under the Affordable Care Act have most or all of their premiums covered by government subsidies.

But that begs a critical question: Who pays for Obamacare?

While the full answer is somewhat complicated, the short answer is easy: You do. Well, you do if you're an average middle-class American…

While the 2009 ACA law designated a variety of taxes and fees to pay for the massive cost of expanding healthcare to millions of uninsured Americans, nearly all of them — one way or another — land on the backs of middle-class taxpayers. 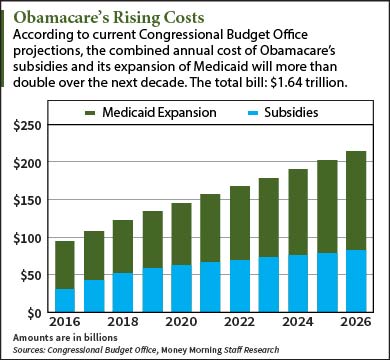 That may seem puzzling to some considering that Obamacare was supposed to save the U.S. government billions of dollars over its first decade.

"The Affordable Care Act reduces the deficit, saving over $200 billion over 10 years and more than $1 trillion in the second decade," the White House boasted on its website after the law was passed.

But if the government is saving money, why do we need new taxes to pay for Obamacare?

You have to understand how the government thinks. When Uncle Sam claims that Obamacare is saving money, it factors in the added revenue from those new taxes as well as other gimmicks, such as reductions in Medicare expenditures. From the government's perspective, then, Obamacare "saves" money.

Related: Health Insurers Using Obamacare's Failures to Get What They Want

But make no mistake. A lot of those "savings" are coming straight out of the hide of U.S. taxpayers. Some of these taxes you'll pay directly, but some are disguised. Many are here already.

These Obamacare taxes will come directly out of your pocket…

But paying for Obamacare will require much more money than will be raised in these taxes. So the ACA created another set of Obamacare taxes that, at first glance, don't appear to be targeted at the middle class.

Don't be fooled, though. The middle class will get stuck paying these "hidden" Obamacare taxes, too…

The Obamacare Taxes You Won't Realize You're Paying

This tax is getting passed on to customers in the form of higher premiums, and not just for those on Obamacare plans. According to an actuarial review by management firm Oliver Wyman, this tax in 2015 added an estimated annual cost of $514 for individuals, $688 for those on small group policies, and $719 for families.

Even Medicaid enrollees faced an added cost of $152, although about half of that must be paid by the state the person resides in. The added costs to states may result in higher state taxes, however.

The costs from this tax could accelerate in a hurry if we continue to see steep premium increases every year. Over 10 years, it's expected to add about $5,000 to Americans' health insurance premiums. The government hopes to raise $102 billion from this tax.

The problem is that the threshold for the Cadillac Tax isn't especially high. A survey last year by the International Foundation of Employee Benefit Plans found that 60% of employers would have gotten hit in 2018 without making changes to their offerings – in other words, reducing benefits.

It gets worse. The Cadillac Tax is indexed to inflation, but we all know healthcare cost increases routinely exceed inflation. So more Americans will get snagged by this tax every year. This insidious design could do even more – it could spell the end of employer-sponsored health insurance, forcing everyone into Obamacare. Expected revenue: $90 billion.

Next Up: 8 Times the Government Was Warned About Obamacare Fraud – and Did Nothing

I think if the insurance company wasn't able to charge what ever they fill like & pharmacy companies .That would help alot & how much it cost for Dr vist . You get 10 min with dr if you're lucky charges 120 $ or 5,000 $ for MRI is high on & on