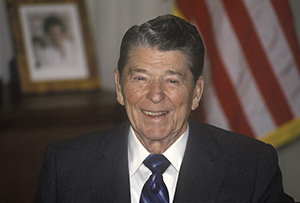 Republicans love Ronald Reagan. The 40th president of the United States is credited with:

Trending: Why Markets Could Get Even Scarier

And because of the feelings he invokes, Ronald Reagan - and famous Ronald Reagan quotes - have been invoked in every Republican primary debate since 1999, according to CNBC...

Each of the Republican nominees in the 2016 presidential race has tried to appeal to voters by highlighting their own similarities to, and reverence of, our 40th president:

Indeed, Reagan's legacy -- and his words -- have had a lasting impact.

Even in 2016, these five Ronald Reagan quotes ring with relevance...

Relevant Ronald Reagan Quote No. 5: "The problem is not that people are taxed too little, the problem is that government spends too much."

Reagan was a firm believer in smaller government and lower taxes. After taking office in 1981, he quickly signed into law one of the largest tax cuts in the post-war period, according to CNN. Over three years, individual income tax rates were cut 23% across the board. Of course he also raised taxes three times during his presidency, but he's still remembered for his first massive tax cut.

Taxes are still a massive issue in today's election. The government is expected to spend $6.7 trillion on pensions, healthcare, education, defense, and welfare this year. The federal deficit was $438 billion in 2015, and feds estimate that the deficit in 2016 will reach $616 billion.

Relevant Ronald Reagan Quote No. 4: "While I take inspiration from the past, like most Americans, I live for the future."

Profit Alert: Should I Invest in Pot Stocks in 2016?

Both approaches have merit -- and Reagan got that right. History is our best teacher, but it's important both candidates account for and adapt to current pressures when creating an economic plan.

The "opening" for a presidential run rides on making big promises and claims to get elected. But once in office, the POTUS can have a difficult time making any real changes. From 2007 to 2014, President Barack Obama stated the GOP filibustered 500 pieces of legislation. But now that he is leaving office, he's having a "hell of a close." Obama is making headlines for visiting Cuba, trying to pass an executive order to stop the so-called "gun show loophole," and he will sign the first major U.S. bill against opiate addiction before he leaves office.

Relevant Ronald Reagan Quote No. 2: "When you can't make them see the light, make them feel the heat."

This sounds like it could be a direct quote from Trump. Many Americans want tougher immigration policies, and Trump is promising to build walls and stop Muslims from immigrating to the United States.

He plans to stop Mexican immigrants from sending money back home in order to force the country into paying for the wall. (Mexican immigrants send roughly $24 billion back to friends and family members each year.) But there is a problematic loophole in his plan that you need to know about...

Clinton and Trump have both been accused of bending the truth or outright lying. Clinton's email scandal seems impossible for her to escape, while Trump's bombastic claims and history of lawsuits against his businesses are still fodder.

Up Next: Donald Trump's To-Do List for China-U.S. Relations

Which is your favorite of these Ronald Reagan quotes when it comes to the 2016 presidential election? Let us know on Twitter @moneymorning and Facebook.