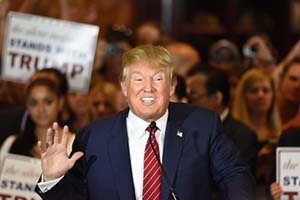 China-U.S. relations have become a central part of Donald Trump's platform since he announced his candidacy on June 16, 2015.

In almost all of his stump speeches, Trump mentions China in some capacity (see video below).

The Republican nominee has heavily criticized China's inclusion in the World Trade Organization under former President Bill Clinton. Since China joined the WTO, Trump said that more than 50,000 factories and millions of jobs in the United States have been lost.

Trump has a long to-do list with China, which he portrays as boldly opposing U.S. self-interests.

In his trademark Trump style, the first thing the billionaire businessman says he'll do is "bring China to the bargaining table." That's according to his website, which lists his policy positions.

Then, once he gains audience with Chinese leaders, Trump said he'll declare China a "currency manipulator." In other words, Trump is saying China artificially deflates the value of its currency so that it can make its good and services more attractive to U.S. importers.

U.S. Corporations Capitalize on Washington: Every working American is required to pay income tax -- but not every major company must. In fact, 11 S&P 500 giants paid none last year, and 43 more were at least partially exempt. Here's a full list of S&P and Fortune 500 companies that didn't contribute to the nation's GDP...

In fact, currency manipulation is one of Trump's biggest grievances with the Red Dragon. He says China's actions have caused U.S. companies to lay off workers - especially in the manufacturing industry - in favor of cheaper goods and labor.

The presidential hopeful also says that he'll put an end to many export subsidies and easy-going labor standards that make Chinese workers so appealing to U.S. companies.

Here are the other main Donald Trump-China policies:

China's Secret Bank: China's going for gold this summer. Literally. The country's state-owned ICBC Standard Bank just purchased a massive gold vault in London. And no one knows where the secret vault is located. Except for the Chinese, of course...