When you think of the end of your life, what do you picture?

Will you leave the world in a few short years, having made a difference?

Will your family remember you as a strong provider? A loving parent or grandparent? As someone who paved their way for a better future?

Or will the inevitability of death rob you of the opportunity to provide all the things you once planned on leaving behind?

If you still have goals and dreams you want to make a reality, then you need to read this letter to the very end.

Because what I'm going to share with you today will inspire you to rethink your future – your understanding of mortality – and the very concept of death.

Thanks to recent breakthroughs in biology, medicine, and genetics, you may be able to accomplish much more in your life than you ever imagined possible.

With what I'm about to show you, that's just the beginning.

You see, the medical and technological breakthroughs you'll discover today are changing everything we've been raised to believe about aging.

In the next few years, these discoveries could extend your life expectancy to 120…

But, before you turn 120, another technology will be improved so much that your life expectancy reaches 150…

And by the time you celebrate your 150th birthday, yet another technology could be so advanced that doctors simply stop predicting you'll die at all.

In fact, because of what you'll discover today, Dr. David Sinclair of Harvard's Genetics Department has announced that:

"There is no limit on human lifespan." – Dr. David Sinclair

His colleagues at Harvard, MIT, Penn, Scripps, and Johns Hopkins have helped to develop a treatment that could be the first step toward a permanent cure for mankind's most deadly disease: aging.

Here's what this is all about…

Doctors have discovered an "Immortality Gene" hidden in our DNA.

And… they've developed a treatment that could allow us to switch it on.

This treatment could require as few as four injections a year.

And besides unlocking our ability to stop aging, these injections could allow our bodies to return to the health and vitality we had in our 30s, and stay there indefinitely.

And it doesn't stop there.

Clinical tests have already shown that these injections make it possible to reverse the effects of age-related diseases.

At the Dana-Farber Cancer Center in Boston, doctors used them to shrink a patient's liver tumor by 70%.

In a 76-man study in Leeds, England, just four of these injections a year dropped patients' cholesterol levels by 77%.

These particular treatments are now being pushed through the FDA's 4-phase approval process.

In as little as two years, they could be distributed to medical facilities across North America…

There could be only one way to distinguish the average 90-year old from a 30-year old: Ask them their birthday.

At that point, there's only one thing standing between you and these treatments.

Your ability to pay for them.

And now there's a way for everyday Americans to overcome this final obstacle.

That's because there’s is a powerful movement building to get the first of these breakthroughs out as quickly as possible. 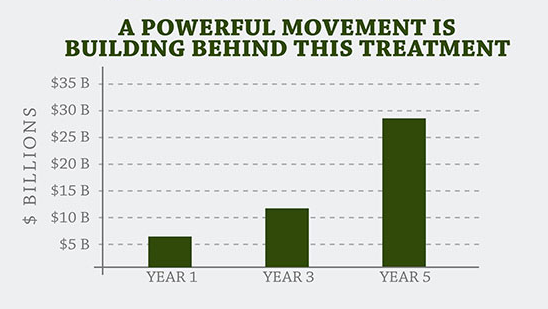 One company has already received $25 million in advanced research funding for it, and there's another $725 million coming right on its heels.

This deal has given them access to distribution agreements with medical organizations in the U.S. and in 170 countries around the world.

Within the first year of this treatment's release, we could be looking at a $6.2 billion industry.

And from there it's going to take off.

Within five years it could explode to at least $29.78 billion annually.

And there's one small lab at the center of this story.

It's extremely important that you act on this information right now.  Discover how to access our exclusive report: Unlocking the Immortality Gene.