In order to get new treatments approved, companies have to take drugs through a lengthy drug development process. 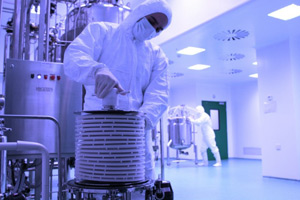 The newer the treatment/drug, the longer the drug development process can be…

For ten years, Alnylam has toiled to show progress on RNAi therapy and gene silencing. It has some treatments in various stages of the long drug development process.

ALNY is now in testing stages for a gene silencing drug that will treat a neurological disease caused by malformed proteins produced in the liver. The only known treatment for the disease currently is a liver transplant – and even that only slows it down.

So what does this mean? If the drug is still in "testing phase," when will it be available?

To even attempt to answer these questions, you must know what the drug development process looks like…

Ultimately, the scientists at Alnylam wanted to "switch on" a particular gene – one that would produce RNA for telomerase (a protein). We're born with this gene naturally switched off. But with the gene "switched on," we have the potential to live 40% longer… at least.

Alnylam has been working on this for a decade and isn't finished yet.

Drug Development Process, Step 1: Preclinical Trials – Preclinical trials are conducted to obtain initial proof that a new drug is both safe and effective for human use, so it often includes animal testing. The efforts put forth in this stage can take several years to complete, and they demonstrate whether it is warranted to proceed to the next step. Alnylam is past this stage.

Drug Development Process, Step 2: Phase I Clinical Trial – Alnylam is past this stage as well – which is intended to generate initial safety information about the drug in humans and assess how it behaves inside the human body.

Drug Development Process, Step 3: Phase II Clinical Trial – This is the phase in which Alnylam Pharmaceuticals' drugs to treat the neurological/liver disease are now being tested. Phase II marks the beginning of controlled testing with patients who actually have the disease, to begin to demonstrate the medicine's effectiveness. The total number of patients is still relatively small – perhaps several hundred people. This phase also produces additional information about short-term side effects and risks associated with the drug.

Drug Development Process, Step 4: Regulatory Review – After extensive testing and study, the drug is submitted for regulatory approval by the FDA. Their decision determines whether or not the drug can be marketed to patients for use. The review process can take anywhere from six months to two years or longer.

Drug Development Process, Step 5: Post-Marketing Monitoring – Since everyone is biochemically unique, individuals may respond quite differently to the same medication. Approved medications have been subjected to extensive testing for safety and efficacy. But even after medications are approved for general use, drug companies continue to collect product-safety information.

Alnylam is just one company with gene silencing drugs in the drug development process. In fact, there's another small biopharma company pioneering a new frontier with the use of RNAi therapy: human immortality. This company has already started testing… Find out how you can get more information on this company here…