Although it's only in its infancy, this "niche" we're going to tell you about today is red hot.

Today, there are more than 300 companies jockeying for position across this industry.

But our research and behind-the-scenes intelligence has narrowed the field to 27 companies that have serious potential to dominate the field.

In other words… this is a young, dynamic market, and it's exploding with growth.

Based on figures from the Bureau of Economic Analysis (BEA), we project this industry to grow up to 408% faster than any other industry tracked by the BEA for the next 7 years.

This is not a fad. This is a trend on steroids. And it has the potential to make smart investors a ton of money.

Just look at the following chart. It compares an equally weighted index of companies identified by Price Waterhouse Cooper as "pure plays" in this industry vs. the S&P 500. 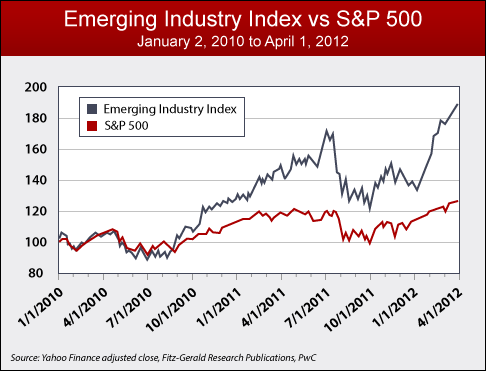 Gains from this emerging industry have already nearly TRIPLED the S&P.

Now look at the chart below. It shows projected growth through 2020 based on figures from the Ponemon Institute and the U.S. Bureau of Economic Analysis. 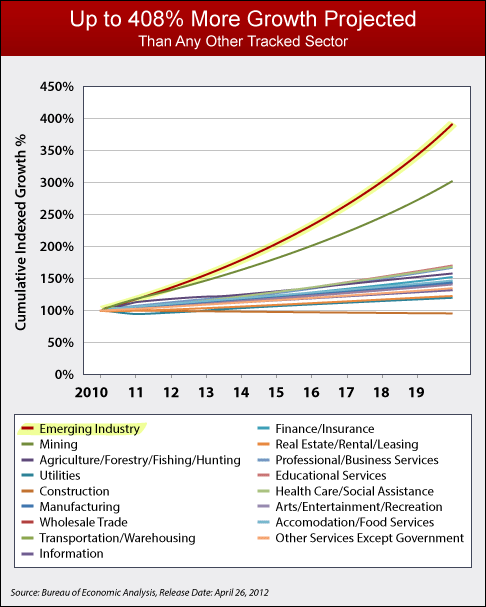 That's up to 408% faster than any industry tracked by the Bureau of Economic Analysis.

And that's with the lion's share of the money going to a select few rocket riders.

It's no wonder the Washington Post recently reported that the government sees a critical need to fill 10,000 jobs in this industry. And that the private sector has at least 40,000 openings.

In the longest period of 8% or more unemployment since the Great Depression, this new industry is already demanding more than 50,000 new jobs… and growing.

Getting in on the ground floor of this kind of growth could generate gains that would make even early investors in oil, cell phones, and computers jealous.

And with good reason. Because this industry has one huge advantage built right into its DNA that virtually no other industry has: It will never become obsolete.

So what industry are we talking about here?

This robust, round-the-clock force deploys weapons and tactics as diverse as the Army is from the Navy… and just as lethal.

And it's not just in the business of protecting anything driven by computers or computer networks. It is engaged in actively attacking those who pose a threat.

And the companies leading this charge will be no less aggressive than the Raytheons, Lockheed Martins, or Northrop Grummans were in their infancy.

So please do NOT confuse CMC with your computer's anti-virus software.

True, Symantec generated 1,550% gains when its anti-virus brand of cyber security propelled it from less than $2 a share to over $30.

"The economic damage from a single wave of cyber attacks on critical infrastructure could exceed $700 billion – or the cumulative toll of 50 major hurricanes ripping into the nation simultaneously."

With every never-ending advance of technology… the level of cyber threats will advance along with it. And that necessitates even more advanced military-grade technology to counter it. In other words, the need for this technology will never become obsolete.

This new Cyber Military Complex is our perpetual last line of defense. And it's here to stay. In fact, it can only get bigger.

Because in the unlikely event that we ever think we've covered every possible threat… there will be hundreds more new ones right around the corner.

"We foresee a cyber-environment in which emerging technologies are developed and implemented before security responses can be put in place."

And everybody has already started spending like mad on it…Defense Department officials are seeking nearly $1 billion more funding in 2012 than first publicly reported.

Federal spending for this industry is projected to reach $10.5 billion – a year – by 2015. That's more than $30 billion over the next three years.

Pike Research estimates that vendors specializing in just one niche of this industry will see revenue jump 208.33% by 2015.

What really has us excited about the way this industry is evolving is this: It's broken up into segments.

The old way of building and servicing an industry is by focusing on one segment. For example, companies that service exclusively banking… or communications… or logistics… or the power grid.

But the new Cyber Military Complex is indifferent to classification. Instead it is function-specific.

Simply put, emerging companies in the CMC have ZERO industry limitations. That means, for example, that a CMC company with expertise in authentication will be able to sell its services to every bank, communications, logistics, or power grid company on the planet.

The point is, every company that needs cyber security probably needs help in multiple areas. And there's growth opportunity for multiple providers in every potential client.

So today's star providers in CMC are taking their products and services and making inroads across all industry lines to reach virtually every company on earth.

The mobile device market is already enormous. And it's growing exponentially every day.
Since January 2011, Apple has sold more than 144 million iPhones. And Google reports that 850,000 new Android devices are activated every day.

The number of Android devices around the globe totals more than 300 million… with a year-on-year growth rate of more than 250%.

On the software side, Apple boasts over 425,000 apps available for its devices. And the Android market now contains over 200,000 apps.

Not surprisingly, the Georgia Tech Emerging Cyber Threats Report 2012 finds that malware targeting mobile devices constantly evolves, and that the threat against Android and iPhone operating systems is exploding.

The opportunity for cyber invasion and theft on mobile devices is about to skyrocket… and the need for the security that the new CMC provides is becoming infinitely more desperate. And for two important reasons:

• Add to that the shipments of multi-media tablets like the iPad. IDC reports it expects the number of units sold to almost TRIPLE to 198.1 million units by 2016.

• That is projected to escalate to a staggering 50 BILLION devices by 2020, according to Hans Vestberg, president and CEO of Ericsson. That's roughly seven devices for every person alive on the planet today… and they ALL need protection provided by the new Cyber Military Complex.

The use of phones as "mobile wallets" for making all sorts of payments is skyrocketing. Vendors, retailers, merchants, content providers, mobile operators, and banks are all actively establishing new payment services.

This makes mobile devices a giant magnet for theft of cash… savings… property… and identity. Everything and anything your mobile device can access.

Bad guys go where the money is, and with the advancement of mobile technology and smart applications, there is no greater concentration of personal risk on the planet.

The very devices we are rushing into headlong are our Achilles Heel.

• 65% of respondents told the Pew Internet & American Life Project that they think most people will have fully adopted the "mobile wallet" as their day-to-day means of paying in the next eight years.

• The value of mobile payment transactions is projected to virtually QUADRUPLE from $170 billion in 2010 to almost $630 billion by 2014.

• A report released by Edgar, Dunn and Company predicts a growth from 10 million mobile wallets today to more than 1 billion by 2015.

And the risks aren't limited to computers and phones, as evidenced by the hacking last April of Sony Corp.'s (NYSE ADR: SNE) PlayStation Network. The attack exposed the personal information of almost 100 million users and forced Sony to shut down the network.

Companies without in-house cybersecurity teams have been on the hunt for a good takeover target to bring such expertise on board.

But a slew of companies are solely focused on computer security, and among them are these five hot profit opportunities.

How To Profit from Cybersecurity Stocks

There are two approaches to take when looking for profits in the computer security industry:

Three companies to consider include:

Two leaders in the computer technology and security training sectors are:

Editor's Note: There's one more company you should look at right away. It's currently locking up security on 50 billion wireless devices… and could see its shares rise from $9 to as high as $300. Getting in now could mean a killing. Go right here.
Login
0 Comments
Inline Feedbacks
View all comments