Details are beginning to emerge concerning Russia and China carrying out a possible attack on the U.S. banking system.

This is a quickly developing story that is now being reported.

His targets threaten to bankrupt millions of Americans. And sources inside the U.S. intelligence community are concerned that that the total damage could be in the trillions of dollars.

The Chinese government has assessed this situation and appears to have decided that the best course of action is to provide aid for Putin’s dangerous plot.

Jim, in a few moments I want to discuss the steps Americans need to take with their investments and personal finances to prepare for everything you and your colleagues are predicting.

But now let's quickly focus on some of these major flashpoints.

One of the key flashpoints we're looking at is foreign ownership of U.S. government debt.

Now, this is a very important thing to understand.

We all know that the Treasury has issued over $17 trillion worth of debt, the question is who buys it?

A lot of U.S. debt is owned by foreigners. Who owns it?

Countries that are not necessarily our friends.

But they can dump it when they want to.

Well, guess what, that's actually what's been going on.

Recently, foreign holdings of U.S. government debt have been plummeting. 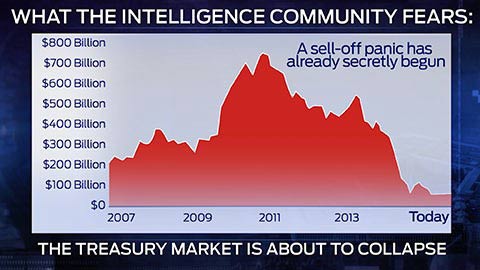 But it gets even more interesting than that.

We talked earlier about the project I did for the CIA…

And we said, you can see not only market action, but rivals, enemies, terrorists and others, operating in financial markets.

So, we all know that Russia invaded Crimea in the spring of 2014.

Let's say you're Putin. You know you're going to invade Crimea. You can expect U.S. financial sanctions.

So what do you do?

You basically mitigate the impact of the sanctions, start dumping treasuries in advance so that when you make your move and the Treasury tries to come against you, you've insulated yourself.

So go back and look at October 2013, here's Russia dumping Treasuries month after month. 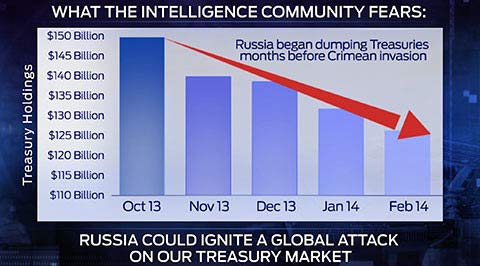 To engage in financial warfare against the United States.

But guess what? It's worse than that. 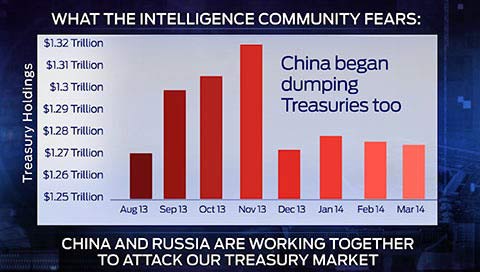 We know the Russians and Chinese are working together.

So is it any surprise that when the Russians started dumping…