While President Obama and the Federal Reserve attempt to convince the public that the recovery is pushing ahead at full speed, a high-ranking member of the U.S. Intelligence Community has come forward to accuse them of covering up an imminent $100 trillion disaster.

And he has the evidence to prove it.

In a startling interview, Jim Rickards, the CIA's Financial Threat and Asymmetric Warfare Advisor revealed his colleagues have begun preparing for what they fear will become an unstoppable, 25-year Great Depression.

The chart below is one of many they're releasing to the public that reveals a U.S. economy that has reached or exceeded dangerous levels not seen since 1929. 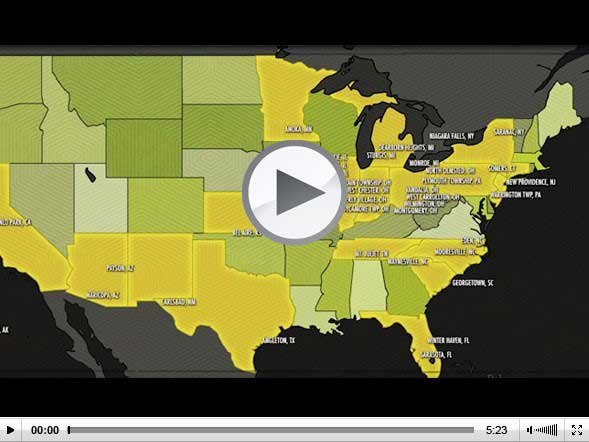 Below, Rickards describes this warning signs, and decide for yourself if he's right.

Jim, are you seeing any signs that our stock market has reached a super-critical state?

We're seeing a lot of signs of this.

One of the signs that's really fundamental, and really important, is the ratio of stock market capitalization to GDP.

Because, remember, the value of all the stocks in the stock market, that's supposed to represent the fundamental economy.

It's not supposed to be off in a world of its own.

But if you look at what's been happening to that ratio recently, it's going sky-high. 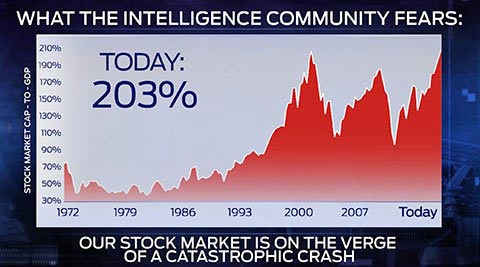 Just prior to the recession… 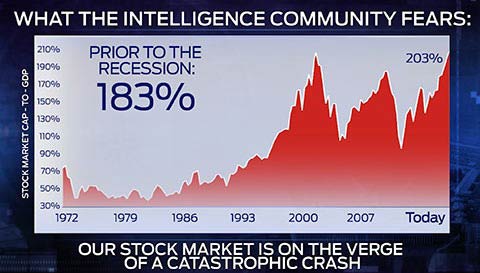 Go back to the famous tech bubble, the dot com implosion of 2000. 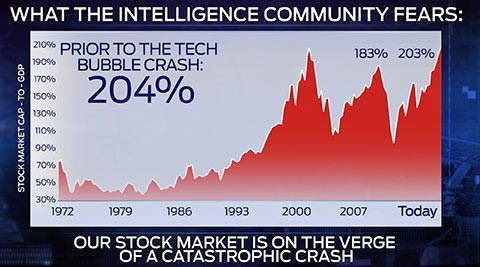 And if you want the scariest news of all…

Just prior to the Great Depression that number was 87%. 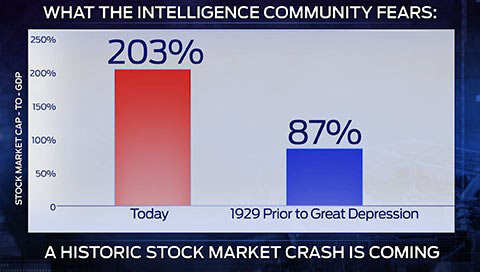 The stock market capitalization, as a percentage of GDP, is twice as high as it was just prior to the Great Depression.

So, that's a really good metric for saying, "Hey, is the stock market heading for a crash?"

But there's another metric, another warning sign, if you will, that's even more frightening, which is the Gross Notional Value of Derivatives.

There are a certain number of shares of IBM that are outstanding, but we know what that number is.

But there's no limit on the derivatives.

I can write options and futures on IBM stock all day long and all the other stocks on the stock market.

And that's what's been going on.

Now, the Gross Notional Value of Derivatives in the world today is over $700 trillion. Not billion. 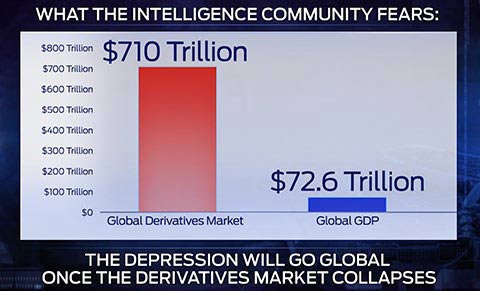 This collapse is unavoidable.

So, we ask ourselves, how bad can this be?

We all remember the value of stocks going down…

All that lost wealth was $60 trillion.

The problem is now the system is bigger, so I would expect the lost wealth this time to be $100 Trillion – possibly a lot more.

There are a number of potential flashpoints I've investigated.