A controversial video investigation led by a team of renowned scientists, economists and geopolitical experts warns a global energy collapse is imminent.

The investigation, filmed by an Emmy Award winning director, was released in late-July and has since gone viral, creating fear that the cost of everything associated with oil - including consumer gas prices - could soon become entirely unaffordable for ordinary citizens.

The work of this team garnered such attention, they were brought in front of the United Nations, UK Parliament, and numerous Fortune 500 companies to share much of their findings. Click on the short video above to see a sample

Gasoline prices have, in fact, have been rising steadily in the past few weeks. After a slowdown, oil prices have also jumped significantly recently on new global economic fears...

How real is the threat?

The investigative team which includes one of the world's leading energy analysts believes they have proof that the threat is indeed real - and the danger imminent.

"We found an unnerving pattern in global energy systems that guarantees they're going to fail," Dr. Moors said, adding that governments around the globe are chiefly responsible.

"It's a pattern that's hard to see unless you understand the way a catastrophe like this gains traction," Dr. Moors said. "At first, it's almost impossible to perceive. Everything looks fine, just like in every pyramid scheme. Yet the insidious growth of the virus keeps doubling in size, over and over again - in shorter and shorter periods of time - until it hits unsustainable levels. And it collapses the system."

What's really disturbing about these findings, according to the investigation, is that the pattern isn't limited to energy and oil. The same catastrophic pattern in our energy, food, and water systems as well.

Dr. Chris Martenson, an expert on the dangers of exponential growth in our energy, environment and economy says "These systems could all implode at the same time. Food, water, energy, money. Everything."

When This Number Hits "1" Look Out

Dr. Moors agreed, saying the road to collapse can be seen today in our energy, food and water production. All are tightly connected and contributing to the economic disaster that lies directly ahead.

But, according to the documentary, nowhere is the situation more perilous than when it comes to global energy and specifically oil.

To illustrate the problem, Dr. Moors points to one of the most overlooked oil and energy problems the economy faces today. It's called the EROEI ratio.

This ratio points to how much energy is needed to get energy out of the ground. And right now the ratio for oil is hitting an alarming number. Where it took 1 barrel of energy to get 100 barrels of oil out of the ground in the 1930s, today that number is 3.

According to Dr. Moors, once the number hits 1, our energy systems will be completely unsustainable. That mean the cost of oil will be so expensive that it will be impossible for average people to afford it. 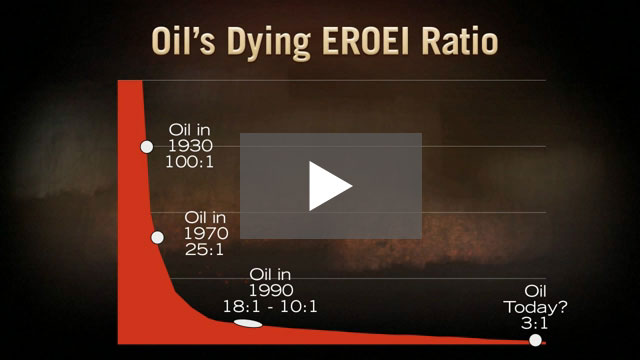 "It's requiring greater and greater amounts of energy to produce the energy that rising populations and markets need to survive," Dr. Moors said. We've got a race against time in our hands that we aren't going to win."

Dr. Moors isn't alone in warning that we are on the verge of a frightening oil crisis.

According to the investigation, the US Joint Forces Command released a study warning of a coming oil crisis that could begin "any minute now."

The investigation quotes General James N. Mattis, a former US Joint Forces Command as saying, "Surplus oil production capacity could entirely disappear, and as early as 2015, the shortfall in output could reach nearly 10 million barrels per day.

Dr. Kent Moors: Germany's military also held a secret investigation into this unsustainable pattern and concluded it could lead to "political instability and extremism." Details here

Dr. Moors cautions that while recent natural gas finds are "pretty exciting", it's unrealistic to think they will resolve our energy problem anytime soon, if at all.

"We haven't taken anywhere near the necessary steps to make the bold leap into alternative forms of energy, including natural gas," said Dr. Moors.

The investigation also warns that we could see panic ensue if Iran decides to play geo-political Russian Roulette and blocks the Strait of Hormuz - or worse breaks out into a conflict with Israel.

A recent report from JBC Energy in Vienna indicated that this scenario may be playing out already.