When I review each of the world's emerging markets in order to decide which ones to
buy in 2011, I start with two questions:

If the answer for both those questions is "yes," that market is much more likely to get
my vote.

But with every rule, there are exceptions, as we shall see…

The Art of Emerging Markets Investing

When you're choosing which emerging markets to invest in, it's important to keep this
one precept in mind: With markets – even more so than with individual stocks – buying
what's fashionable and overpriced (in other words, what's "hot") can be hazardous to
your wealth.

The reason for this is fairly obvious. Most investors who buy emerging-market stocks
don't have a good handle on the political and economic risks of the country concerned.
When the market in question starts to rise, they get excited – or even worried that they
might be getting left behind – and jump in.

That's why these markets tend to overshoot on the upside.

And it's emotions that cause these markets to overshoot to the downside, too, following a crash, making the best emerging-markets bargains very good, indeed.

Since the beginning of 2010, the best four performers among the emerging markets
have been Thailand, Peru, Chile, and Indonesia. This last country is the sole member of
the so-called "CIVETS" (Colombia, Indonesia, Vietnam, Egypt, Turkey, and South Africa)
economies that we'll be looking at here.

Of these four emerging-market economies, Peru now carries a startlingly lofty price/
earnings (P/E) ratio of 44.9, according to The Financial Times. Indonesia and Chile are
also fully valued, at more than 20 times earnings (a valuation that's much less forgivable
for a market than for an individual stock). Only Thailand looks reasonably valued, at
about 14 times earnings.

However, I think market optimism this year has not taken full account of the political
risk that Thailand faces. The current government ousted the country's legitimately elected
government in 2008 under some very dubious circumstances. And the newcomers to the
government remain very unpopular outside Bangkok.

Since an election is due in 2011, the chances of something going badly wrong must be
pretty high. And even if the current government maneuvers itself to re-election, the risk of
unrest is high.

The bottom line: In spite of the decent growth rate – and apparently reasonable
valuation – I think Thailand is best left alone.

India and China: A Tale of Two Outlooks

There are other markets that are simply overvalued, even though they have not
advanced to become even more overvalued in 2010.

India, for example, appears overvalued, at 25 times earnings. The problem with India is
that its government can't stop spending money. Even with economic growth of more than
8% in 2010, the budget deficit (including both national and state budgets) is around 10%
of gross domestic product (GDP).

Add to that an inflation rate that's persistently in the double digits – and an ongoing
balance-of-payments deficit – and you have a country that is severely in danger of
experiencing a credit crunch.

India's P/E ratio of 25 takes account of the opportunities available in that market, but
not the risks. Avoid India for now.

China, on the other hand, looks to have a reasonable rating, with a market up 11% this
year and a P/E ratio of about 15.

Here, there is a "two-tier" market.

There are companies – not all of them in the state-owned (SOE) sector – with
astronomical P/E ratios. One such example is New Oriental Education & Technology
Group Inc. (NYSE:EDU), which carries a P/E of roughly 50. At the other end of the
spectrum are some value-oriented, medium-sized companies, including China Security &
Surveillance Technology Inc. (NYSE:CSR), whose shares are trading at an alluring 5.68
times earnings.

But before we all rush out and buy the gamier Chinese small caps, here's a word of
caution.

Although these companies are being sponsored for U.S. listings by the likes of
Goldman Sachs Group Inc. (NYSE:GS) and have been audited by major international
auditors, there appears to be a huge amount of fraud in the Chinese small-cap sector, with
fictitious earnings and even fictitious revenue being quite common.

Of course, given the valuations, there's an easy solution: You just buy a portfolio of
these companies and keep your fingers crossed that not more than 25% to 30% of them
are fraudulent. You should make enough on the winners to cover your losers.

Speaking of fraud, the best current value among the major emerging markets is Russia.
It's up only 5.7% this year and is trading at only 9.3 times earnings. At that level, I have to
admit that I can get tempted.

The contradictions inherent in the Russian economy are much less damaging when
oil prices are high. With the price of "black gold" at more than $80 per barrel right now –
and with the current short-term price trend for oil headed up rather than down – Russia
appears to be worth a bit of a flutter.

Bear in mind, though, that a flutter is just what this would be – a bet or wager. The
country has no real property rights to speak of, and any Russian company is subject to
expropriation if the owner annoys Vladimir Putin.

Still, low P/E ratios in a decently growing environment can't be ignored altogether. And
the team of forecasters for The Economist has Russia growing 4.2% in 2010 and 4.0% in
2011 – not bad for a country whose population is static.

Our journey through the world's emerging markets has finally reached its destination
– and a surprising one at that. That's because the one market that's poised to be the class
of the field in 2011 is one that could easily be overlooked as belonging to the "junk" end of
the market. 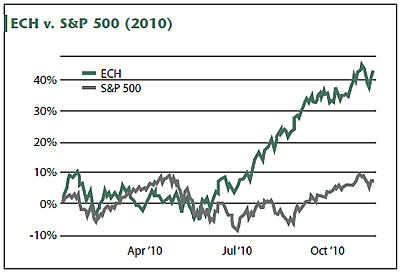 This is a well-run country
with good property rights. The
Chilean government's handling
of crises, both the major crisis
of February's earthquake
and the minor one of the
trapped miners, has been
exemplary. New President
Sebastian Piñera promises
faster growth, and the country
is well-positioned for high
commodities prices.

In a world in which China and India's 2.5 billion people are increasingly fully engaged
in the world economy, natural resources look to me a better bet for development than
cheap labor, so Chile is currently my favorite emerging market.

However, the country is just emerging from recession and a major earthquake, and
its excellent new government has policies that appear likely to speed growth. Sometimes
– not often – high valuations are justified. I believe that Chile's market may be one such
example.

Action to Take: Invest in Chile, with the expectation that it is will be an emergingmarkets
top performer in 2011.

The most-straightforward way to travel is the exchange-traded fund route, via the
iShares MSCI Chile Fund (NYSE:ECH).

In terms of individual stocks, I like Vina Concha y Toro SA (NYSE:VCO), a producer
of very high-quality wine. It's currently trading at about 21 times earnings, with a dividend
of nearly 4.0%. That's a somewhat premium valuation, but I like the dividend, and Vina
Concha is unquestionably a premium company.

[Editor's Note: The stuff in one remote Chilean sand pit could create six times more revenue than oil. And one
tiny company owns the lion's share of it. Governments in China, the U.S., Japan, and even Russia are spending
billions to refine it. And since we're due to hit "peak oil" in 2011, it could even spark a war. Own this stuff and
it's likely you'll double your money… four times. This must-see presentation has all the details. Just go here.]

Martin, What do you know about NENE, New Energy Technologies and their new SolarWindow device. I saw it on CNBC a month or so ago. It can make electricity from the sun's rays or indoor lighting sources. Kinda neat, huh? Their stock is up over 400%. Thanks–Don Rouanzion Burlington, NC

What about sequesterization of carbon dioxide emissions from coal, which powers 46% of the electricity in the U.S. ? China's building plants to do that now, with interested U.S. companies AEP, Duke Energy and GE providing technological assistance. Solar power, or windwill, or any of those other trendy green techologies, are decades away from being cost-effective. And while I'm at it, what about nuclear?

Can you please give us a link where we can easily find the P/E ratios of stock markets for various emerging economies. That would be very useful.

I bought shares of a Chilean company, SQM, a year ago and am still holding it. It has done very well for me. I think the Chilean economy is doing very well.