Iconic investor and Chairman and Chief Executive Officer of Berkshire Hathaway Inc. (NYSE: BRK.A, BRK.B) Warren Buffett announced on Feb. 26 in his annual shareholder letter that his company was eyeing acquisition targets in 2011, sending many "follow the guru" investors on a search for the next big takeover.

Berkshire's cash rose to a three-year high of $38.2 billion and Buffett said the firm was on the prowl for new buyouts.

"We will need more good performance from our current businesses and more major acquisitions," wrote Buffett. "We're prepared. Our elephant gun has been reloaded, and my trigger finger is itchy."

Many analysts view the defense industry and agriculture sectors as the most appealing sectors.

"He's probably looking for something along those lines," Barry James, president of James Investment Research Inc., told Bloomberg News. "All these are great fits for any value investor. Obviously, we're going to need defense, energy and agriculture. Those are just good, solid companies."

Berkshire's usual targets include companies with market value of $5 billion to around $20 billion, little or no debt, pretax profit of more than $75 million and consistent earnings.

ADM fits the technical parameters Buffett lays out. It has a market value of $23.3 billion, is trading at 12.1 times earnings, and analysts expect profits to hit record levels this year and next.

"ADM, as a food processor and middleman, is more plausibly up his alley," Brian Barish, president of Cambiar Investors LLC, told Bloomberg. "The jewel of the company is that they have a huge business, which is called agricultural services. This is transporting food, storing food and grains. That's a very difficult business to replicate. That one seems potentially very interesting." 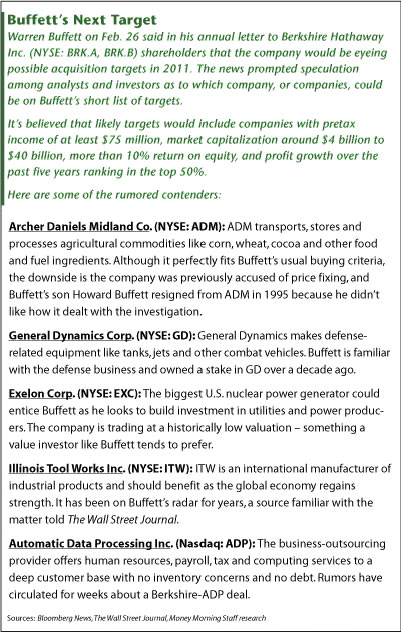 But ADM isn't a sure bet as the next addition to the Berkshire family. In 1996 ADM agreed to pay a $100 million antitrust fine after the U.S. government accused the company of price fixing. Buffett's son Howard Buffett had worked for ADM, but quit in 1995 because he disliked the way the company handled the investigation, according to The Wall Street Journal.

General Dynamics, another rumored target, has a market value of $28 billion and has traded at an average of 13.2 times earnings over the past five years. Buffett owned a stake in GD about 10 years ago.

General Dynamics "does have a business that he's familiar with," Thomas A. Russo of Gardner Russo & Gardner, told Bloomberg. "That's one that's possible."

Buffett in his letter to investors indicated that Berkshire is confident in the U.S. economy, which is why his company is on the hunt for new opportunities.

"Money will always flow toward opportunity, and there is an abundance of that in America," Buffet wrote.

Berkshire invested $5 billion, or 90% of its total expenditure, in U.S. property and equipment last year. He also said a U.S. housing recovery will begin in the next year, giving a boost to those Berkshire subsidiaries tied to that sector.

Buffett also shared Berkshire's plans to add to its position in The Marmon Group, a manufacturing business in which it holds a majority stake. Berkshire first snagged a 64% stake in Marmon three years ago, and is now buying an additional 16.6% for $1.5 billion.

Buffett last year completed his last big purchase, Burlington Northern, after building a stake in 2008 and 2009. Buffett already owned a 22.6% stake in Burlington when he bought the remaining 77.4% in February 2010.

Rising commodity prices have helped boost revenue at Marmon and Burlington. About 40% of Marmon's revenue increase, or $360 million, was due to last year's jump in copper prices.

"Warren and I have hated railroads our entire life," Munger said in 2007, the year Berkshire first started investing in Burlington. "They're capital-intensive, heavily unionized, with some make-work rules, heavily regulated, and long competed with a comparative disadvantage versus the trucking industry, which has a very efficient method of propulsion (diesel engines) and uses free public roads. Railroads have long been a terrible business and have been lousy for investors."

However, rising oil prices and highway congestion have made trucking a much more expensive industry than railroads, increasing available business for Burlington.

Buffett called the Burlington acquisition "an all-in wager on the economic future of the United States," and reduced Berkshire's holdings in riskier picks like newspapers and healthcare companies to compensate for the investment.

Since the Burlington takeover, rumors have put the railroad's CEO Matt Rose on the list of Buffett's possible Berkshire CEO successors. Berkshire said this week it had identified four contenders to lead in Buffett's absence but did not release names.

"He is a 100% fit for our culture," said Buffett. "I can define the culture while I am here, but we want a culture that is so embedded that it doesn't get tested when the founder of it isn't around. Todd is perfect in that respect."

Buffett has repeatedly stressed the importance of preserving company culture, both for the business and investors, and someone who can do that will be a lead contender to take over the reins.

"He wants me to make sure that the culture's not disrupted," Howard Buffett said Feb. 25 in an interview with Bloomberg Television. "Maintaining it with the right CEO in place will not be that hard to do."

I know this article is a couple of years old now, but I think people need to know there is two sides to Buffett.

Please copy and paste the link below – I think some of you will see that all is not what it seems where Buffett is concerned. I hope the link downloads ok for people to read.

DD – you are referencing a blog as gospel. For starters….buffet's manufactured home business (clayton homes & its finance arm) are hurt by federal subsidies to non manufactured housing via fannie mae, freddie mac and the fhlb. Additionally his reinsurance businesses are hurt by federal subsidies in that his competitors are the likes of AIG. If AIG wasn't bailed out I believe his ability to raise rates dramatically — instead of having to drop them — would have occurred. The likes of AIG were able to fund cheaper than BRKB during the 2008/2009 turmoil. Had the bailouts not occurred he may have taken hits on the likes of suntrust and bank of america….however imagine the pricing power of an existent wells fargo…even a hobbled one…if those bailouts had not occurred. His biggest investment you mentioned was with arguably the least hobbled bank in WFC. American Express most likely didn't need its bailout — lest you forget these were mandatory to take. Yes some of the companies that received them needed them, many of them did not.
DD – part of your problem is that you read something and regard it as fact. I suggest you take a more discerning eye in the future….the blogger you linked to may in fact be unemployed and quite dim….one of the reasons he has time to blog.
I'm just looking out for you….consider it a gift.