(West Palm Beach) A clear and direct relationship has existed between employment and house prices in the US over the past 9 years. In order for housing prices to turn up, a necessary condition would be a sustained upturn in total employment. Although the widely reported seasonally adjusted employment data seems to indicate that such an upturn is under way, the actual, unadjusted data isn't so clear, and therefore it's not clear that the conditions are in place to put a floor under house prices.

The BLS household survey showed a gain of 699,000 (actual, not seasonally adjusted) jobs in April to 139.6 million. That is a sharp slowing from last April's gain of 1.3 million. That employment gain correlated with a strong seasonal bump in house prices. With the slower growth indicated this year, the usual seasonal bump in house prices should be weaker than last year. 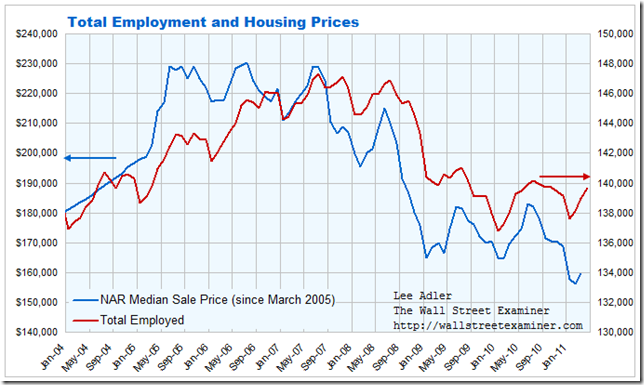 The year over year gain in employment this April versus last was just 359,000, which also represents a significant slowing from the prior 3 months, when year over year employment gains ran 790,000, 890,000, and 979,000 respectively. Employment growth appears to be slowing, and that's likely to mean bad news for house prices a few months from now. Listings price data collected from Housingtracker.net suggests a price bump of 4.2% in March and April. This data has correlated well with subsequently released sales price data. It suggests that the NAR's median sales price should rise to approximately $167,000 over the next couple of months. That would fall far short of the June-July peak levels of $182,000-$183,000 in 2009 and 2010. Those price peaks were aided by the home buyers' tax credits.

Any price gains are likely to evaporate when Federal stimulus programs, the big seasonal tax refund period, and the Fed's QE2 all go away between now and July. This does not bode well for the current uptick in housing prices or the future trend.

In the big picture, the question is whether total employment breaks out past 140 million by the seasonal peak in July. That would suggest enough of a trend reversal in employment to at least put a foundation under housing prices. But if total employment rolls over around or below that level, don't count on any real improvement in the housing market.

Hope this helps more than confuses!