The U.S. dollar is currently on an upswing - but don't let it fool you.

What we're seeing is only a short-term rally inspired by Europe's travails. In the long-term, the U.S. Federal Reserve's loose monetary policy and the United States' own debt burden will drive the greenback back down.

That's the consensus among experts who follow the global money markets and the leading currencies, including several of Money Morning's own analysts.

"The dollar is going to rally in the short-term so long as the primary liquidity mechanism (used by the world's central banks) continues to be dollar swaps," said Money Morning Chief Investment Strategist Keith Fitz-Gerald. "How long that is going to last is uncertain but once it abates, our own enormous debt problems and inflationary policies will return to the spotlight, and the dollar will quickly give up its recent gains."

Indeed, the dollar has rallied in the first half of 2012, as Europe's debt battle continues to dominate the headlines. The U.S. Dollar Index, which measures the dollar's value against a basket of foreign currencies, ended last month about 715 points above its 2011 low.

That momentum is likely to continue for the next month, but not long after. [You can find ways to battle the dollar's decline - and grab consistent potential gains from a proven investment strategy - in a new report from Money Morning Private Briefing. Get it right here.]

Several economic factors will weigh far too heavily on the currency for the upward move to continue - although it's not clear exactly when the short-term surge will lose steam. And investors who understand what's really driving the U.S. dollar's value right now can avoid getting burned by the currency's long-term decline.

The U.S. dollar's short-term boost is coming from the need for Eurozone governments to support themselves with more liquidity.

"The ECB (European Central Bank) will be left with little choice in saving banks and their sorry sovereigns other than to print, print, print euros, and more of something almost always leads to a lower price," said CNBC News' Brian Sullivan, who thinks the U.S. dollar will reach parity with the euro by the end of the year.

The euro fell to a 17-month low against the dollar a few months ago.

U.S. dollar value has also been driven higher recently by increased demand, since the central banks in Europe, the United States, Great Britain, Japan, Canada and Switzerland have all agreed to lower the interest rates on dollar swaps.

"Dollar swaps - you know, those little arrangements that allow foreign banks to swap their unloved currencies for dollars - ... really come in handy when there's a panic and a flight to the safety of U.S. Treasuries," Money Morning Capital Waves Strategist Shah Gilani explained.

Since U.S. Treasury securities must be purchased with dollars, increased demand boosts the currency's value.

"The dollar is enjoying a safe-haven status, but long run I'm not a fan of the U.S. dollar," Dr. Allen Sinai, chief global economist at Decision Economics, told Forbes. "Our country has too many problems - with long-run growth forecasts, deficits and how the politics of our country operates are all a negative."

Indeed, the dollar's prolonged decline has been supported by the ongoing struggles of the U.S. economy, the ever-growing levels of U.S. government debt, and the misguided "fixes" and other monetary and interest-rate maneuvers by U.S. Federal Reserve Chairman Ben Bernanke and his cohorts.

"The Fed will be obliged to undertake another round of quantitative easing and it will be a major source of negativity for the dollar," said Forex.com Chief Currency Strategist Brian Dolan. "The economy has been so slow for so long, it'll force the Fed's hand."

The dollar also faces a growing challenge from the Chinese yuan in its long-standing role as the world's dominant reserve currency. China's been making strides in turning the yuan into a global currency by increasing its role in the gold market and facilitating foreign investment in its currency. 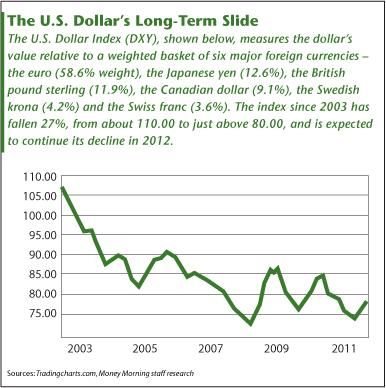 And luckily for investors, there's a way to play both the short-term rally and the long-term fall of the U.S. dollar.

How to "Play Both Sides" in the Dollar

To play the dollar's fluctuating value over the next few months, investors can use a Forex market contract, futures contracts on the U.S. Dollar Index or the dollar versus leading individual currencies, or one of the new dollar-based exchange traded funds (ETFs). For short-term trades, options on either futures or ETF shares can also be used.

Investors who opt to play the currency's near-term strength must remember to monitor the events affecting the dollar's value - a "buy and hold" approach won't work.

"Be nimble," said Money Morning's Fitz-Gerald. "Harbor no illusions about what's happening. Capture profits as they're created by maintaining tight trailing stops, and steadily ratchet them up if the rally gains steam."

One of the leading ETF candidates for a short-term bullish dollar play is the PowerShares DB US Dollar Index Bullish (NYSE: UUP). Actually exchange-traded notes (ETNs) rather than ETF shares, units of UUP are issued in 200,000-share blocks by a "master trust" that seeks to replicate the performance of the Dollar Index by holding a combination of Forex contracts, futures, and options. Those shares then trade in smaller numbers, just like shares of regular stocks, and the price mirrors the percentage changes in the actual index.

That's for a short-term dollar rally, but you should also plan to profit from the dollar's longer-term decline.

One of the best ways to play the long-term bearish dollar outlook is through ETF/ETN shares, like the PowerShares DB US Dollar Index Bearish (NYSEArca: UDN). It's structured the same way as the UUP fund, but the trust holdings include short Forex and futures contracts and options, combined in a portfolio designed to move inversely to the Dollar Index itself, but by a similar percentage.

The alternate way to make a longer-term ETF play against the dollar is to buy shares in one of the growing number of ETFs linked to foreign currencies - depending on whether you believe that particular currency will benefit from the dollar's weakness.

Currencies with their own ETFs include the Australian dollar, British pound, Canadian dollar, Chinese yuan, euro, Indian rupee, Japanese yen, Mexican peso, New Zealand dollar, Russian ruble, South African rand, Swedish krona, and Swiss Franc. Some currencies, like the rupee and yen, even have two funds from which to choose.

When the dollar reverses in coming weeks, you will also need protection for your U.S. market investments. Anything that's valued in dollars will lose intrinsic value as the dollar falls. And let's not forget the ugly beast of inflation that's already rearing its head inside the U.S. markets.

A proven market strategy can help you protect your assets from both a falling dollar and inflationary forces. One such strategy that's handed out 45 winning recommendations in less than 7 months is Money Morning Private Briefing. Get the latest special report from Private Briefing and find out how you can get $28,636 worth of investing ideas for $5 right here.

A final option for bearish dollar investors would be to open a bank deposit account denominated in a foreign currency you think stands to appreciate considerably against the dollar in the years ahead.

the site is very nice