The money pundits in the press and on TV are gleefully reporting that the blue chips are up over 13,000. They seem to be saying, "Happy days are here again!"

But they're completely wrong.

It has taken trillions of dollars of money from the U.S. Federal Reserve to boost these share prices back near their 2007 highs.

That means this run of market growth isn't related to real growth. The Dow you're invested in is dangerously inflated.

The value of the REAL Dow is much lower than what you see every day.

In fact…the REAL Dow is at 8,800 right now – and when this market bubble pops, that's where the Dow will go.

The real explosion will happen after January 1,2013. That's when the unavoidable "fiscal cliff" of tax hikes and spending cuts will begin to inflict massive damage on the economy.

If you don't protect your investments now, you could see more than half of your money wiped out by the coming financial crisis and resulting market collapse.

In a minute I'm going to give you specific and immediate steps you can take to guard your money. But first, let me show you exactly what is happening.

The Real Value of the Dow

The reason the Dow's real value is a staggering 50% lower than where stocks are now trading stems from intervention by the U.S. government.

You see, the U.S. government hasintentionally decoupled the stock market from the economy.

That is, the connection between the stock market and the U.S. economy has been erased. Obliterated. And that's a problem. A big problem.

EDITOR'S NOTE: How big a problem is it? A group of prominent economists believes a devastating economic collapse is not only coming… it's a mathematical certainty. The evidence is startling… and undeniable. See it here.

We can pinpoint the precise moment this "decoupling" began – February 23rd, 1995, at the Federal Reserve's bi-annual Monetary Policy Report to Congress.

That's when Fed Chairman Alan Greenspan first suggested the loose monetary policy that has stolen the American dream from so many investors.

This abrupt reversal of policy spurred an immediate rally in stocks. And overnight, an unthinkable precedent was put into effect.

The Fed's policies could now be used to pump up the market – not strictly as an emergency measure in response to a national crisis, but just because.

This opened the floodgates to Quantitative Easing, money printing, interest rate manipulation, and other "stimulus" shenanigans that have become The Fed's MO over the last 17 years.

The result: An artificially engineered "Franken-bubble" unlike any in U.S. history.

Remember what happened after 9/11? Greenspan cut interest rates to stimulate the economy, creating the housing bubble. That caused the "crash" of 2008 – which as you can see, was really just the market reverting to its fundamental economic value.

However, before the Fed started manipulating the market in February of 1995, the Dow and S&P 500 accurately reflected America's economic growth.

The following facts plainly show this.

However, since February of 1995, America's average yearly inflation rate has been 2.48%. And the average annual GDP growth has been only 2.38%.

That's a combined 4.86%. This means that if the historic relationship between GDP growth, inflation and the stock market had held true after 1994, the Dow would've closed the second quarter of 2012 at 8,808.

A recent report from the Federal Reserve Bank of New York proves that these calculations are accurate. According to that July 11 report, as much as 50% of the S&P 500's gains since 1994 are due to market reactions to Fed monetary policy announcements.

What this Means for You

There are two critically important things you need to know if you want to actually make any money in the comatose, Franken-bubble market we're facing.

ONE: The Fed's "market cocaine" is losing its pop – The effectiveness of Quantitative Easing and other stimulus at pumping up equities is diminishing fast.

For instance, QE2 expended 50% more stimulus cash for every point it raised the Dow, compared to QE1. And The Fed's "Operation Twist" is costing even more per market point than did QE2.

This latest stimulus attempt from the Fed could do even less. And those who get caught in it could have a big price to pay.

TWO: The economy won't "re-couple" with stocks until 2021 – Eventually, today's hyper-inflated stock market will reconcile with the rock-hard realities of the U.S. economy. It's simple economic physics.

So, let's say that for the foreseeable future, the U.S. economy posts a modest 2% annual growth, and 3% annual inflation. Using the same formula that held true from 1947 until the market's 1995 "decoupling" from the economy, it'll be nine years before the real economic fundamentals catch up to where the market is today!

Here's what these two things mean.

For at least nine more years, we can expect a "comatose" stock market – flat overall, with occasional spikes and drops of volatility.

Morgan Stanley just revised downward its forecast for America's GDP growth in 2013 – to 1.75%, from this year's 2% growth estimate.

MS also issued a warning that because of the unavoidable "fiscal cliff" of tax hikes and spending cuts, the U.S. GDP could get a lot lower after 2013.

But even this gloomy forecast could be extremely optimistic.

So the best case scenario: The Dow takes nine years to catch up to its real value, meaning little to no growth in the market.

The worst: The Dow collapses to its real value – and takes 50% of your money with it.

Four Ways to Protect Your Money from the Dangerously Inflated Dow

Now that you know the real value of the Dow, would you trust your savings, your retirement, to this overinflated market bubble?

Here are assets that will let you not only hold on to your money but also turn a profit while the Dow corrects to its real value.

While QE1 and QE2 clearly did little to strengthen the U.S. economy, their effects on the markets were undeniable.

Thanks to the Fed, this trend has just been rebooted.

That means you should maintain exposure to inflation-sensitive assets, like precious metal favorites silver and gold. They will continue to do as well or better than they did during QE1 and QE2.

The only difference with this round of QE is that it's going to be much bigger and go on much, much longer.

So as a result of the Feddoublingits balance sheet over two years, Bank of America says they expect massive inflation, enough to see golddoubleas well.

They foresee gold to $3,350 an ounce. The outcome is so obvious now even a major bank can see it coming.

While oil's price rise cooled this year, new forecasts show that will not be the case for 2013.

Bank of America expects inflation to double oil prices, sending them to $190 a barrel.

But there's a lot more to oil's price rise than inflation.

Money Morning oil expert Dr. Kent Moors outlined three key reasons other than inflation that point to higher oil prices in 2013 and beyond:

Dividends represent the biggest source of returns you can get from stock investing.

Now, to a lot of people, dividends may not sound very sexy.

That's because they don't realize that 90% of the U.S. stock market's returns over the last century have come not from share appreciation, but from the cash that companies pay their shareholders. 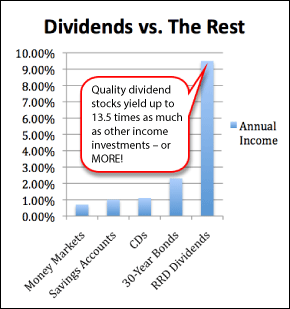 When you think about this, it's like having the thousands of people employed by these dividend-paying companies all working to make you rich.

But you can't just go for high yield. As we enter a period of slow economic growth, you have to find companies that not only have a long history of dividend increases, but can survive a U.S. recession.

That's why Emerson Electric (NYSE:EMR) and Procter and Gamble Co. (NYSE: PG) rank among our favorite dividend stocks. They have more than half of their business overseas. Both have raised their dividends every year since 1957 and 1954, respectively. Emerson yields 3.2% and P&G 3.6%.

Another top dividend stock is OmegaHealthcareInvestors(NYSE: OHI). OHI is a real estate investment trust (REIT) andthe company's leases have an inflation-protection clause built in, so your nominal yield – in this case 7% – is even better than it looks since the dividends tend to rise with inflation.

Legendary Wall Street trader Jim Rogers recently offered this unconventional advice: If you want to get rich, you should be investing in farmland.

"It's the farmers, the producers, who are going to be in the captain's seat when the prices go through the roof," he toldThe Australian Financial Review.

Over the last 100 years farmland, based on income and capital appreciation, has consistently delivered positive returns — with only three brief periods of negative returns (1930s, 1980s, and 2008).

And as the saying goes, they just aren't making any more of it. So a severe imbalance is developing in the supply and demand of farmland.

Farmland is also an opportunity to invest in an asset class not directly correlated to stocks and bonds, and one with significantly less volatility.

Rogers believes investing in farmland is "in its third inning." In other words, there's still plenty of time to get in.

One way is to invest in agricultural futures through ETFs like the PowerShares DB Commodity Index (NYSEArca:DBC). The fund tracks an entire basket of agricultural commodities including corn, soybeans, wheat, cotton, sugar, coffee, cattle and pigs.

There's also Adecoagro S.A. (NYSE:AGRO), a Luxembourg-based company that owns significant farmland holdings in South America. It owns nearly 500,000 acres of farmland, consisting of 23 farms in Argentina, 13 farms in Brazil, and one in Uruguay.

Canadian citizens can invest inAgcapita Farmland Investment Partnership, a farmland private equity fund, with significant holdings in Saskatchewan, Alberta and Manitoba. Jim Rogers is actually an advisor to the fund, currently open to retail investors for a minimum investment of $10,000.

One More Thing You Should Know About…

As you now know, governments and central banks of the world have spent and borrowed us into oblivion by wasting our tax dollars, hard work, and loyal citizenship.

Eventually foreign countries are not going to trust that investing in America is a safe bet.

Even worse, our debt is creating an incomprehensible threat that is quickly bearing down on all 313 million Americans.

To understand the truth about America's economic future, take a look at this gripping investigative documentary.

You owe it to yourself to learn what else the government is hiding from you.

OK, market will crash to 8,800 and it will go down a lot faster than it was pumped up with all the FED's funny money. That offers an ENORMOUS profit potential on the downside, something that happens only once every 5-10 years or so. So, given the accompanying economic crash, what stocks are grossly overpriced and will go down by an even greater percentage that we should be keeping an eye on?