If you thought all the talk about taxing the rich meant the government would not be reaching deeper into the pockets of most Americans, then you haven't heard about the pay-per-mile tax.

It hasn't happened yet. But Congress is considering a new way of taxing American drivers that would charge them per mile instead of the current 18.4 cent-per-gallon gasoline tax they pay now.

A new study by the U.S. Government Accountability Office (GAO) says that such a pay-per-mile tax, also known as a vehicle-miles-traveled tax (VMT tax) or ObamaMiles, would cost the average American motorist at least $100 more per year than the current gasoline tax.

The problem the federal government faces is that the annual gasoline tax revenue of $34 billion has fallen far below the $78 billion required to maintain the country's highway system.

For a pay-per-mile tax to generate that kind of revenue, drivers would need to pay an average of 2.2 cents per mile. According to the GAO, that would represent a 153% increase over what motorists pay now.

The increase for each motorist would vary widely, depending on whether you drive a gas guzzler or a hybrid, and how many miles you drive each day. Hybrid owners with long commutes would get hit the hardest.

Meanwhile, commercial trucks would face a 120% increase in driving-based taxes, the GAO said. That would likely push up the prices of all goods transported by truck – virtually everything you buy at a store. 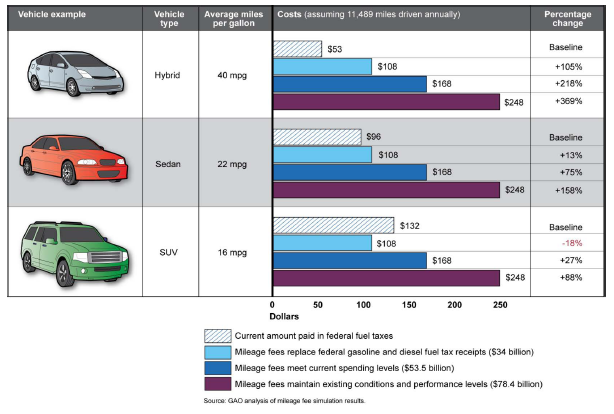 Why the Government Wants a Pay-Per Mile Tax

Part of the problem is that the gasoline tax was never indexed for inflation.

That's why instead of simply raising the federal gasoline tax, Washington is looking into replacing it with a pay-per-mile tax. It gives the government a way to extract tax from folks who own electric vehicles (who buy little or no gasoline) and substantially more tax from hybrid owners.

What's more, several states, such as Nevada and Oregon, are seriously considering pay-per-mile taxes of their own. And Washington state will impose a $100 annual fee on drivers of electric cars starting next month.

"I personally don't like it, considering I drive two fuel-efficient cars in the family – a turbo diesel and a Prius – and I think that [government officials] want their pound of flesh no matter which way they're going to get it to compensate for decades of bad fiscal policy," Fitz-Gerald said on FOX Business Network's "Varney & Co."

Oregon may be the furthest along in its quest for a pay-per-mile tax. Its Department of Transportation is testing several ways to implement a VMT, which could go into effect as early as 2015.

With Oregon and Nevada leading the way, Fitz-Gerald expects other revenue-hungry states to follow suit in the years ahead. And pay-per-mile taxes cooked up at the state level most likely will sit on top of any federal VMT tax – just as with per-gallon gasoline taxes now.

How a pay-per-mile tax would be collected is a dicey issue in itself, beyond the added out-of-pocket costs.

Perhaps the most objectionable idea would put a GPS inside each car to track how many miles it travels. The data would be sent to a central government office, which would then mail out a bill.

That means the government would know the whereabouts of every vehicle in the United States at any given moment. Talk about Big Brother.

"Once the government gets its hands on [this kind of] data, it's not going to back off. In fact, it's only going to get worse," Fitz-Gerald warned.

Other ideas include a pay-at-the-pump system in which a transmitter in the car would send odometer data to a receiver at the gas station so the VMT tax can be added to the cost of the fuel.

While the second idea would not be as invasive, the infrastructure required to carry it out would be very expensive, ultimately defeating its purpose. The GPS idea is both invasive and costly.

"The administrative costs of this program, like many government initiatives, are expected to outstrip additional revenues for years," Fitz-Gerald said.

While no pay-per-mile tax is yet a reality at either the state or federal levels, the need for more highway maintenance revenue means higher taxes are coming one way or another – even if it ends up as a big increase in the current per-gallon tax.

"We are not spending enough to keep up with the maintenance and repairs of roads and bridges," Joshua Schank, president and CEO of the ENO Center for Transportation in Washington, DC, told CNBC. "People don't understand paving roads, adding roads, etc. costs money. That money has to come from somewhere."

Funny, Not one mention of cutting costs maintaining highways, just examples of how to rasie taxes on citizens to pay for it, sound familiar? It is insane to think on one hand the gov. gives tax breaks for those who purchase hybrids, and on the other, they want to tax them back, so where are their heads, up their butts for sure. lol For years there was an incentive given by states and federal trying to encourage people to buy energy efficient vehicles, and now they want to penalize these same people. That will be the day when I allow… Read more »

Mr Schank should be advised that the taxpayers do know that road upkeep costs money – and we think the government should use the money it has for this rather than some of the other foolish spending choices it makes.

This is absurd. If the government concentrated on things that are under the jurisdiction of the Constitution, then there would be plenty of enough money for infrastructure projects at half of the current tax rates. Instead, governments think that they have to supply cradle to grave services that will bankrupt us and leave no money for the things that are needed. Raising the tax will just force drivers to drive less and further reduce government revenue. Our government officials are clueless when it comes to finance and economics. This will result in our destruction. It is just a matter of… Read more »

IN AMERICA, YOU HAVE CHOICE At least with a possible toll-mileage tax, a VAT (Value Added Tax), a Utility Users Tax, and any number of possible new Federal taxes or fees we still have choices. A Russian Physical Therapist told me "in Russia, you always have choice". It may not be a good choice, but nonetheless, a choice. Same in America. You can chose not to spend and save the sales tax. You can chose not to drive, to carpool, or drive less frequently and save gasoline and tax bills. Its all in your control. That's better than high inflation… Read more »

The govt had a golden opportunity to spend hundreds of billions extra on road repairs during the crash "stimulus" program. How many miles of highway actually got built or rebuilt? So much rhetoric promising shovel-ready projects. Let's have the breakdown on how the budget-busting stimulus actually got invested? And which congressmen are lead sponsors of this tax increase so we can remember whom to turn out of office in 2014?

unfortunately almost no one remembers what happened to the gas tax revenues. previously (years ago) just like the social security "lock box", the fuel tax revenues (gas AND diesel) were kept separated from other government revenues and we had MORE THAN ENOUGH monies in those "accounts" or lock boxes. I may recall the exact titles incorrectly but those funds (as I recall) were kept off budget meaning that NO ONE could move money from those accounts to be used for anything other than the INTENDED purpose (such as soc security or fuel taxes for roads). However…. politicians being the thieves… Read more »

And what about all the tax dollars that we send to Isreal??? Just WHY are we sending them
tax dollars when it is illegal as all $@#$%???? But then, those people in DC aren't there to represent us, they're there to get rich—er at our expense!!!

This is NOT Congress wanting this Tax… It's DEMOCRATS in Congress who want this tax. Them and Obama. For years Democrats have said they want OUR gas prices to mirror those of Europe. Since they can't make that happen they are going through the back door. Obama is good at going through the back door and around things and this is no different. If they want more money for the highway trust fund the solution is easy. Reduce the price of gasoline so people buy more gas that is already TAXED. The more gas sold the more money rolls into… Read more »