A new twist to investing and financial planning is averting travesties that the government itself created; first it was the fiscal cliff, now it's the debt ceiling 2013.

The debt ceiling is a part of the way government has to go about doing its business.

However, both sides of Washington have come to use the full faith and credit of the United States of America as a bargaining chip – and the consequences are huge.

Prior to World War I America was different. Congress had to approve and make the terms of all new debt issued.

By the time we were about to enter into The Great War in 1917, this process became too cumbersome. In a time of conflict, money needed to be collected and disbursed pretty quickly, so debt issuance rules were relaxed from 1917 – 1939.

After 1939, an aggregate debt limit was established where the Treasury was given the freedom of how to reach that ceiling.

This was the beginning of the modern concept of the debt ceiling.

Since its inception, Congress has raised the debt ceiling 83 times. And for the most part, this procedure hasn't threatened the global economy.

That's because it's been understood that approval of the debt ceiling does not control spending. It only allows Congress to pay for what it has previously agreed to spend. It assures payment of our bills, so it was always raised.

Now, it's turned into a political weapon in the budget war – with your money at stake.

How Debt Ceiling 2013 Could Affect You

Our current debt limit of $16.4 trillion has been reached.

To buy us a little time, the Treasury can pay bills until about mid-February with some $200 billion of emergency borrowing the government calls "extraordinary measures."

If Congress finally votes to approve another short-term increase, we'll have a few more months until we're faced with raising it again.

The House voted overwhelmingly in favor of a bill to suspend the debt ceiling through May 18. The bill won bipartisan support, and passed with a final vote of 285-144.

The bill now heads to the Senate, where Democrats have indicated the bill will come up for a vote later this week.

In the interim, here's a look at what could happen if the latest efforts fail.

If you look at the work that the Bipartisan Policy Center (BPC) – a non-profit think tank founded by the likes of former Senate Majority Leaders Howard Baker, Tom Daschle, Bob Dole, and George J. Mitchell – we can get a better idea of what could happen while Washington battles over spending.

According to the BPC, if no agreement is reached by the time the Treasury exhausts the extraordinary measures – a date the Center calls the "X Date" – Treasury will only be able to pay the government's bills with the revenue they receive on a daily basis.

There's no surprise that with all the bills we have, daily revenue will not be enough.

BPC sees two possible scenarios that could play out if we reach the X Date:

Here's a BPC forecast of what would happen to payments if Washington failed to raise the debt ceiling and ran out of emergency funds, using Feb. 15 as the X Date. 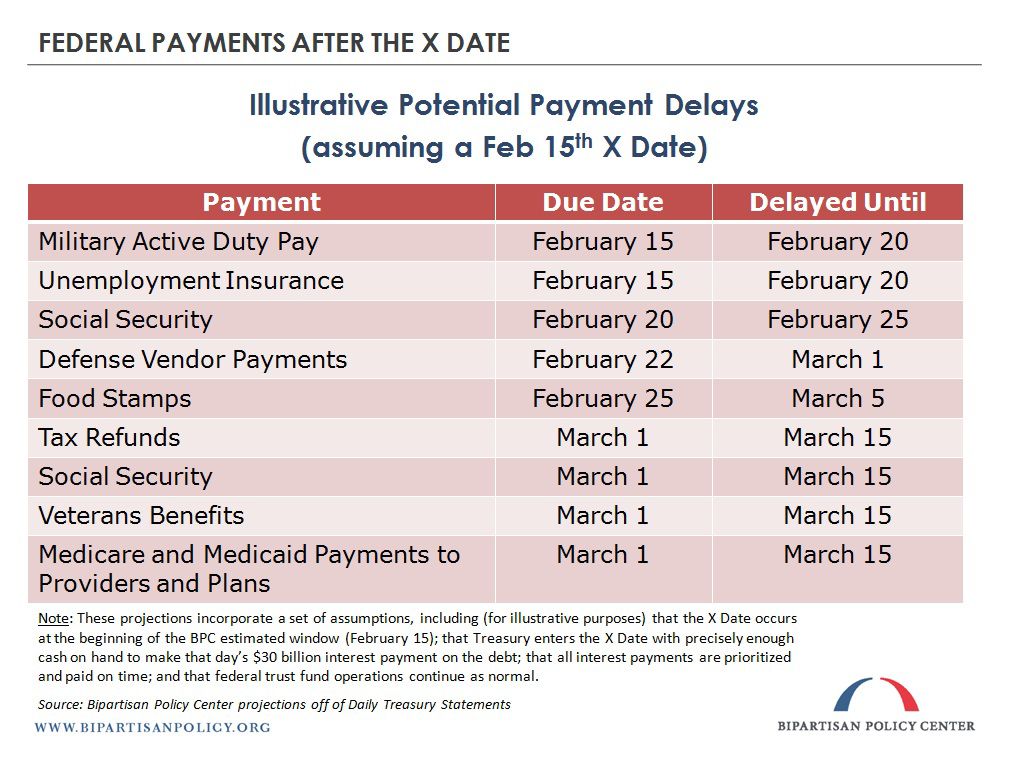 The Department of Treasury has acknowledged that the delays could create a dramatic snowball effect in a short period of time due to the size of our deficit.