The U.S. mining industry was dealt a devastating blow as Kennecott Utah Copper's Bingham Canyon Mine experienced a pit wall failure causing a massive landslide with rocks and dirt covering the bottom of the mine pit. It's a miracle no one was hurt due to the vigilance of its owner, Rio Tinto. 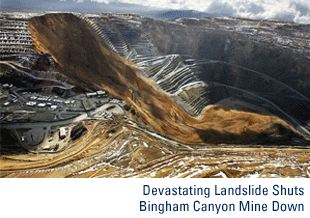 Brian Hicks, portfolio manager of the Global Resources Fund, is very familiar with the mine, having visited it often. He also has personal ties as both of his grandfathers were once employed by the mine. When Brian saw the photo of the landslide posted on the web, he said the substantial destruction of the collapsed wall and falling rock was apparent, yet the tremendous scale and magnitude of the mine cannot be captured in pixels.

Bingham's immense size is a powerful sight to witness firsthand. It is one of the largest open-pit copper mines in the world, it's the second largest copper producer in the U.S., and it's been in operation for more than one hundred years.

The mine supplies about 1 percent of copper to the global market, says research firm Paradigm Capital. In the fourth quarter, the mine produced 59,000 tons and 163,000 tons in 2012. Because of the landslide, analysts expect there to be a huge decline in the overall copper output from Bingham this year.

This is a short-term setback for Rio Tinto, as the mine is one of four main copper assets for the company, but Nomura sees an additional shift in the copper market, "where this could take a market where many observers felt a meaningful surplus was about to emerge, back to remaining quite tight" in 2013.

Copper production had been rising to a new high, as you can see below. Credit Suisse charts the rising supply of copper coming out of Canada, Chile, China, Mexico, Peru and Zambia, which represents 60 percent of global supply. In the fourth quarter of 2012 only, copper in the top 6 countries increased 8.5 percent on a year-over-year basis. 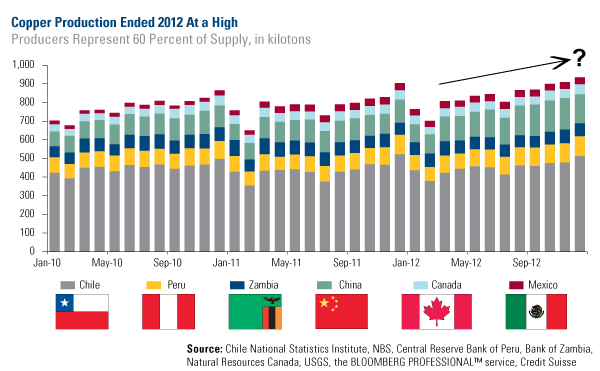 With production higher, copper has moved from a deficit to a balanced market, which is typical, but "this is not to say that persistent growth of new mine supply is not problematic for a variety of technical and other reasons," says Credit Suisse. In addition to the setback from Brigham, the new mines under development, including one in Mongolia, might not come on line as quickly as one thinks.

Copper mining has always been dealt more than its fair share of challenges: We've discussed labor disputes in the past, such as the massive strike in Grasberg in Indonesia, which significantly reduced production from a pre-disruption level of about 500 to 700 tons to 136 tons in a year, says Credit Suisse. Political issues and weather catastrophes have also hurt copper supply in recent years.

The good news is that demand for copper persists. With four babies born every second, a growing population along with rising urbanization will continue to drive the need for copper.

The red metal is also the most widely consumed base metal, dominated by wire and cable and used in anything that is electrical or electronic. Credit Suisse estimates that about 20 percent of overall copper is made into building wire and construction uses make up almost 30 percent of the world's copper use.

Another growing use of copper comes from hybrid and electric cars. Many countries, including China which already uses 40 percent of the world's copper, have been encouraging residents to purchase hybrid and electric cars via subsidies. These fuel-efficient cars consume substantially more copper than an automobile run on gasoline. Whereas a gasoline-fueled car uses 50 pounds of copper, an electric car can consume triple that amount, says the Copper Development Association. I often say, there's no free lunch on the commodities table: If more hybrids fill the roads, more copper will inevitably be needed.

The landslide in Utah is just one example of how quickly and unexpectedly the supply and demand factors facing the red metal can shift, which I believe underscores the need for nimble active management.

rio tinto has got heaps of copper in Mongolia with a slight reduction in worldwide copper production it might peak up copper price a bit The copper at torquies hill is very close too a huge market that is china. I am glad nobody got hurt I don't want to make money out of other people's misery. frank