During the first week of May every year, the maxim, "Sell in May and Go Away," gets taken out, dusted off and powered up as a reason to sell stocks. The rhyme is more than just a catchy urban legend: June, July, August and September have historically been the weakest months of the year for the S&P 500 Index.

Yet even if seasons trigger certain events, when the snow falls in Minnesota in May, Midwesterners need to throw on their winter gear and roll out snowblowers, not lawnmowers.

Consider this encouraging research: The S&P 500 has been rallying for six months in a row, which has happened 48 times since 1950. Following these six-month winning streaks, stocks have historically continued rising. Sixty percent of the time, the S&P 500 climbed 0.79 percent over the next month; 84 percent of the time, stocks increased 3.50 percent, 7.77 percent and 11.77 percent the next three, six and 12 months following the streak. 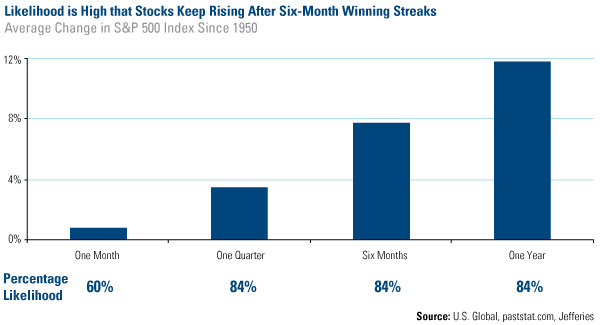 In addition, 165,000 jobs were added to payrolls in April, helping the unemployment rate fall to 7.5 percent. This is the lowest level since December 2008.

The news comes days after the Federal Reserve stamped its approval on another month of bond buying, with the added bonus of Ben Bernanke stating that the Fed is "prepared to increase or reduce the pace of its purchases to maintain appropriate policy accommodation."

Our portfolio manager of the Emerging Europe Fund, Tim Steinle, described the ECB's motivation this way: It's one thing to punish the periphery; it's another to weaken the core.

The S&P 500 has climbed an amazing 12.74 percent through April 30, so if you're eager to do some investment spring cleaning, you might want to consider areas that have underperformed. For example, take a look at the year-to-date returns by sector, which reveal an interesting pattern. Health care, utilities, consumer staples and consumer discretionary have all climbed more than 15 percent, much more than the market. Meanwhile, companies in the materials, energy and industrials sectors have lagged the overall index.

In recent days, an inflection point seems to have occurred, with these weaker areas of the market gaining strength. We wrote in the Investor Alert last week that cyclical stocks, including health care, consumer staples, utilities and telecommunication, have been lagging the remaining sectors. From the beginning of the earnings season on April 24 through May 3, energy, industrial and materials stocks are nearly the best performing areas of the market.

We believe expectations might have become too lofty for defensive companies and too gloomy for cyclical stocks, so as perceptions toward global growth improve, it won't take much for energy, industrials and materials to take off.

Spring Clean Your Treasury Portfolio Too

It's interesting to note that while low interest rates help keep the government's debt payments low, these rates hurt seniors living on a fixed income. My friend, Terry Savage writes this week,

"Savers are the big losers in this rigged game.And most domestic savers are seniors and those approaching retirement, who planned to live on the income generated by their savings. Today, that's simply not possible – unless they are willing to take on a lot more risk."

Here's an alternative that offers both a shorter duration and higher yields, without a lot of risk: The Near-Term Tax Free Fund (NEARX) has a tax-equivalent yield of 1.51 percent as of March 31, 2013. Its 30-day SEC yield is 0.81 percent. These yields are significantly higher than a 2-year Treasury. Learn more today.

The important idea for investors is to adjust to the current conditions. Regardless of the month, if the thermostat shows frigid temperatures, dress accordingly. Likewise for when it's hot in the summer.

What's important is to stay tuned and make sure your portfolio is dressed accordingly.