Americans worried about how rising oil prices might affect prices at the pump are about to get blindsided by looming gas tax hikes that almost guarantee higher gasoline prices.

And it's not just state governments looking to shake down American motorists.

Alarmingly, the International Monetary Fund (IMF) has called for the U.S. government to increase the current federal gasoline tax of $0.184 per gallon by a whopping $1.40.

In a March 26 speech, IMF Deputy Director David Lipton said the gas tax hike would pay for social programs around the world as well as to save the environment.

"The time has come for subsidy reform and carbon taxation," Lipton said.

This federal gas tax hike, if imposed, would add $14 to a typical 10-gallon fill-up and hundreds of dollars to the annual cost of driving.

"Higher gas prices hit those who can least afford it the most as American families are forced to pay a larger percentage of their income on higher energy prices," Rep. Fred Upton, R-MI, chairman of the House Energy and Commerce Committee, told Fox Business. "Drivers across the country are already struggling to pay up to $4.00 a gallon for gas, and further price increases at the pump could be devastating to low- and middle-class families and disastrous to our economic recovery."

Now if only state legislatures felt the same way…

Revenue-hungry states are increasing gasoline taxes to make up for budget shortfalls or raise money for new transportation projects.

At least 17 state legislatures have either already passed gas tax hikes or are considering doing so.

Wyoming, California and Maryland are among the states that have already approved gas tax hikes.

Wyoming's gas tax will rise from $0.14 a gallon to $0.24 a gallon in July. California's $0.035 increase of its gasoline excise tax also takes effect in July, and will give California the nation's highest total gas tax (federal plus state taxes) at $0.72 a gallon.

But the most dramatic gas tax hike is coming in Maryland, which voted to increase its levy in several stages beginning this July.

Other states currently mulling gas tax hikes include Michigan and Iowa, and more cash-strapped states are expected to join the crowd in the next year or two.

"These states' bold actions may serve as a model for other states grappling with the same [transportation funding] issues," Ben Husch, a National Conference of Legislators director, told Fox News.

Not surprisingly, the American public is profoundly unenthusiastic about spending more money on gasoline.

According to a Gallup poll last month, 66% of Americans would vote against a state gas tax hike of up to $0.20 a gallon intended to raise revenue for road repairs and mass transportation projects.

The citizens, of course, don't get to vote for or against individual taxes, but they can vote out the legislators who do in the next election.

Here's a chart from the American Petroleum Institute that shows how much people currently pay (as of April 23) in combined state and federal gasoline taxes. The chart does not include any of the July gas tax hikes. 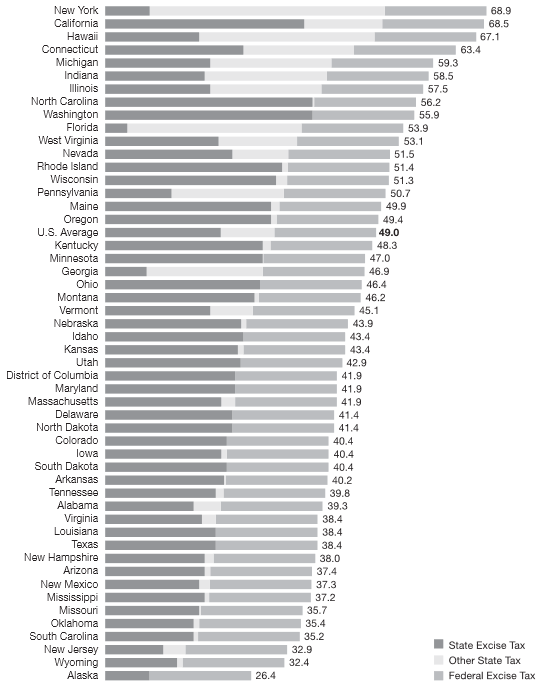 Does the IMF have anything to say to poor people in rich nations, other than (something unprintable)?

"Pay for social programs around the world," I have news for Mr. Lipton, America is tired of paying for everyone else around the world. We have our own problems: corporations shipping thousands of jobs overseas, a deeply corrupt political system and a rabidly biased, blind and deliberately nonsensical public.
The only thing that makes one feel slightly less outraged is the fact there isn't a government in the world that isn't exactly like ours.

Who does the IMF think they are, telling us to raise our gas taxes to pay for
aid to other countries ? ? Other countries problems are just that: Their Problems
and we as Americans are not going to help pay for them. Charity begins at home.
We should cut out all foreign aid and the US Budget would be under control in
under 10 years time.

Unfortunately, the budget can NEVER be brought under control again by any means other than a complete shutdown and replacement with a different system.

The dollar IS ALREADY DEAD. The longer people refuse to do the math and ignore what's coming, the less prepared they will be when the REAL crash finally hits.

Of course, you don't believe me…so take a look for the boxes marked "total debt per person" and "total debt per family" and ask yourself how many people you know who have that kind of money sitting in their chequing account, ready to just cut a cheque and pay off "their debts."

The fact is that the current global monetary fraud is ALREADY OVER. They just haven't "made it official" yet.

While they collect the last of their profits, they're also trying to lull people into yet another false sense of security, so that they're willing to buy houses they can't afford and cars they can't pay for, and once they reach the proper profit percentage, they're going to call in their loans that you can't pay…and then they'll take whatever you own in place of what you owe, that you can't possibly hope to repay, since they never created the money you'd need to repay it in the first place!

Remember: When you got the home loan, they gave you a piece of paper, NOT CASH. They didn't print the cash, they "created the money on paper." Now, if they didn't create the cash that you are expected to repay the loan with, where are you going to get the interest that they also didn't create, to pay their fees with?

Henry Ford said it best, over a century ago:

"It is well enough that people of the nation do not understand our banking and monetary system, for if they did, I believe there would be a revolution before tomorrow morning."
— Henry Ford

The key for the bankers is that, even today, almost nobody understands the vast, global scam that they've been perpetrating on the world…and even if they do understand it, people honestly believe that the fraud can continue forever. But it can't. And it won't. (Pay attention to Germany in September…if they leave the Euro, all bets are off, globally, within a few weeks of that happening.)

With The Money we have spent on the 12 year war in Iraq ,Afghanistan and all that crap, we could have rebuilt many roads, homes bridges, and build homes for those who need low income housing. It comes down to Greed,Power, and Stupidity. That is why this country will fall. There is plenty of Oil to go around, prices are superficially inflated all the time. The government unnecessarily creates panic. Its all manipulated. We will Soon Be taxed for breathing.