I really do hate to say this, but the government threat to your assets is growing... again.

We've seen it happen in Cyprus, where bank accounts were "raided" to bail-in the country.

We've seen it in Argentina, Poland, Hungary, and other nations where private pensions were nationalized to help the countries' ballooning debts and deteriorating sovereign credit ratings.

I even warned you that the new MyRA accounts could be a shrewd way to get at your savings, and that the IMF was floating the idea of a "capital levy - a one-off tax on private wealth..."

Well, now a French "economist" is using his best seller as a platform to advance a tax "plan" centered on your wallet...

A new book, Capital in the Twenty-First Century by Thomas Piketty, has already spent 74 days in the top 100 as an Amazon.com best seller. Despite reaching its fourth printing, it's still regularly selling out.

That's not something you can often say about a book on economics.

Piketty spent 15 years accumulating and researching data on wealth inequality. The nearly 700-page tome was well-received in the U.K. and America.

His work even earned him the title of "rock star" economist, and his book tour landed him a meeting with Treasury Secretary Jacob Lew, a lecture at the IMF (surprise), and a talk to Obama's Council of Economic Advisers.

So what could he be saying that's perking up so many high-profile ears?

Well, his theories lead him to conclude that under capitalism, the rich consistently get richer and that this inequality is perpetuated and inevitable.

His solution to this problem is simple: Eat the Rich.

One of the most relevant charts from his book looks at the proportion of wealth owned by the top 10% of Americans from 1910 to 2010. 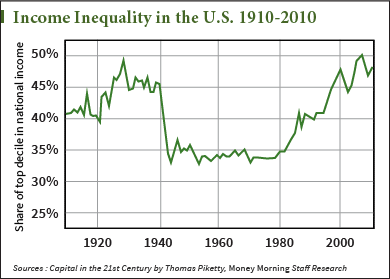 Co-founder and former CEO of Cambridge Associates (a global investment firm), Hunter Lewis, offered his thoughts about the data:

"What we actually see are two peaks for high earners, right before the crash of 1929 and again before the crash of 2008. These are the two great bubble eras in which government printed too much new money, which led to a false and unsustainable prosperity. These were also crony capitalist eras, as rich people with government connections used the new money to become even richer or benefited from other government favors."

Interestingly, and perhaps not so surprisingly, Capital in the Twenty-First Century was not well-received in his home country of France.

I'm guessing that's because of their recent experience with Piketty-like reforms. Socialist President Hollande imposed a 75% tax on millionaires which, despite being challenged in court, just needed tweaking to be considered legal.

Here's What's Really Disturbing... and What to Do About It

of course Piketty is welcome at higher levels of govt. he's singing their favorite tune. march(run) the other way to your own music.

Why would a human being work, only to have eighty percent of what he created taken away? Such thinking will only lead to widespread poverty and misery for any society subscribing to it.

Bad ideas have a life of their own, just like a bad nickle in a coke machine- it keeps coming back again and again out the coin slot. A higher income tax is a cyclical policy that periodically comes and goes. Just take a look @ how much Federal Income tax levels have fluctuated in the past 100. Nothing new.

As far as a European style "Wealth Tax" , well, that might be 1ST. The other option is just plain take it, as in civil asset forfeiture. Falsely accuse someone you don't like and take their gold coins, then put them in prison (Ref. France, Devil's Island Penal Colony, Dreyfess Affair or the famous Steve McQueen movie "Papillon" ).