Historically, low unemployment has led to faster wage growth. But that hasn't been the case over the last six years. 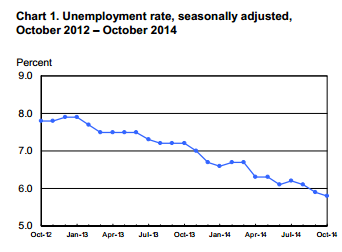 In the Bureau of Labor Statistics report on nonfarm payrolls released today (Friday), data showed average hourly wages barely budged. Average hourly wages in the private sectors inched up a meager 0.1%, or $0.03, in October, after falling a penny in September.

That leaves year-over-year wage growth unchanged at 2%. That's well below pre-recession gains of 3.5% to 4.5% and is barely keeping pace with inflation.

Holding back higher wages are U.S. employers' overall labor costs, including pay and benefits, like healthcare costs. Those high costs aren't likely to change, so future wage growth is unlikely.

And in spite of several years of efforts by the U.S. Federal Reserve, including shrinking interest rates to rock-bottom levels and three rounds of quantitative easing, the central bank hasn't been able to bring back rising wages. In fact, October's report suggests the U.S. central bank won't be in any great hurry to hike interest rates despite a declining unemployment rate.

In short, workers (aka consumers) are in no better shape now than they were several years ago. In fact, with costs for goods and services rising across the board, it's fair to say they're in worse shape.

And despite an uptick in consumer confidence – last week it hit its highest level in seven years – stagnant pay holds back consumer spending, hampering a full economic recovery.

What today's report tells us then is that while an economic recovery has started, it has a long way to go…

"It appears that we are finally in the first stage of a labor market recovery," Steven Pressman, professor of finance and economics at Monmouth University in West Long Branch, N.J., told Money Morning.

The second stage of recovery, however, has still not begun.

Pressman explained there continues to be a lag on a key macroeconomic indicator: large increases in new business formation. That, Pressman said, is a major reason the labor force participation rate remains at a four-decade low.

The third stage, where large demand for workers pushes up wages, is still nowhere in sight.

Note: Gold continues to be the best crisis hedge investment – but only if you know how to avoid buying fakes. Here are the seven best ways to tell if your gold is real.

"Wages and average weekly earnings have not changed much more than inflation in the past month, the past year, or the past several years," Pressman shared. "Median household income is still below its level from before the economic crisis and hasn't changed much in the past quarter century. We saw concerns about stagnant wages in the mid-term elections earlier this week. Voters in several states, including hardcore red states like Arkansas, Nebraska and South Dakota, all voted for large increases in the state minimum wage."

Waning wage growth aside, following are a dozen key takeaways from the October jobs report.

12 Highlights from the October Jobs Report

Today's Top Investor Story: As of 2014, more than 52% of Americans have made a fatal trading mistake. They thought they were playing it safe by using this strategy, but the truth is… it cost them a lot of money. Today, our Capital Wave Strategist Shah Gilani – who has more than 30 years of trading experience – pulled back the curtain on one of the biggest threats to your money. If you learn this lesson, you'll never have to worry about losing money to it again…