Ekso stock is a favorite pick of Money Morning Chief Investment Strategist Keith Fitz-Gerald. He believes Ekso Bionics stock could rise more than 13-fold over the next five years. He first recommended EKSO on Oct. 2.

Founded as Berkeley Electronics in 2005, the company changed its name to Ekso Bionics Holdings Inc. in 2011. Ekso stock went public in January. Based in Richmond, Calif., Ekso designs and builds "wearable robots" for people with physical disabilities. Ekso suits allow people with severe mobility disorders, stroke victims, and those with spinal trauma to walk again. The machines strap around the waist and legs and use motors to assist the wearer's movements. 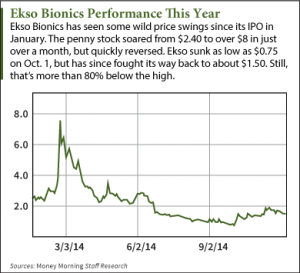 First, it's important to recognize that Ekso is a penny stock that has had a brief but volatile trading history since its Jan. 17 IPO. Some positive articles on the Internet shortly after the IPO pushed Ekso stock over $8. But as an early-stage growth company, Ekso is investing heavily in its business and consistently reports losses.

Disenchanted investors looking to get rich quick dumped Ekso. Over the following months, EKSO fell below $1. (This is also why we at Money Morning advise waiting to buy IPOs.) A chart that ugly tends to scare off a lot of investors, particularly in the treacherous world of penny stocks today.

To make matters worse, to raise $22.8 million last month Ekso convinced warrant holders to exercise 22.8 million $2 warrants for just $1. The "overhang" from that kind of move often pulls a stock's price toward the exercise price - in Ekso's case, $1.

Ekso Bionics Holdings (OTC: EKSO): Why It's a Penny Stock to Buy

Fitz-Gerald actually paid a visit to Ekso headquarters in October. He was blown away by what he saw.

"My trip to tiny Ekso was quite simply the most inspirational visit I've ever made to any company... in any industry... anywhere in the world," he said.

He saw how quickly users can put on an Ekso suit and how easily the suit can adapt to the wearer with just a push of a button. Both traits put Ekso ahead of competing suits, he said.

Those key advantages also caught the attention of the U.S. Department of Defense. Ekso has received more than $35 million in research grants from the DoD. It has also licensed its technology to Lockheed Martin Corp. (NYSE: LMT).

Ekso also has received a grant from the National Institutes of Health (NIH) to build a suit for injured children.

As you can see, EKSO can tap into two big markets: medical devices and the military.

Here's a link to Keith's June 3, 2015 response regarding EKSO (on his Total Wealth Research website):
http://totalwealthresearch.com/2015/06/how-to-handle-a-short-attack-on-a-stock-you-own/

Any recent words about EKSO? My gut reaction is that the product is very good, but my stomach is suffering from recent falls in the market. I still have confidence….but need someone to say some words of consolation while EKSO sinks in price

Thanks for reading Money Morning. Keith has been studying the situation with EKSO and has just published a column explaining what's happening on his Total Wealth website (one of Money Morning's sister sites).