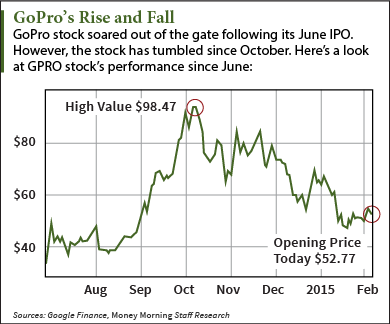 The GoPro earnings report for Q4 2014 was released today (Thursday) and the camera company smashed estimates.

What drove revenue through the holiday shopping season was GoPro's newest camera, the Hero4. GoPro released it in September, which also helped Q3 sales.

The company has also been driving customers to its app. Downloads of the GoPro app exceeded 2.8 million in the quarter. Now more than 13 million people have downloaded the app total.

This is the third straight strong earnings report for GoPro since going public. In its previous two earnings reports, GPRO beat expectations by an average of 41.6%.

And it looks like investors expected today's strong numbers. GPRO stock finished Thursday up 4.9% before the earnings report.

While today's earnings report certainly looks bullish at first glance, GPRO stock is not a good investment according to Money Morning's experts.

In fact, it's facing a major problem that's only growing larger. And it's been weighing on the stock since October...