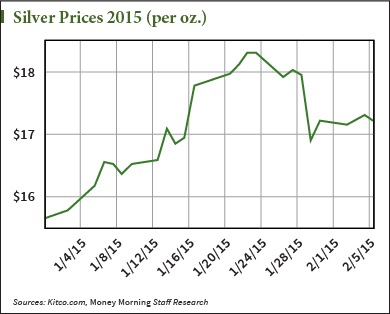 The January 2015 silver price rally is a welcome change from December 2014, when prices fell 5.2%. Months of declining silver prices before 2015 drove the white metal down to four-year lows.

While it's nice to see silver prices rising in 2015, our 2015 silver price chart shows volatility is a big issue. Silver rose about 17% from the start of the year until Jan. 22, then dropped 5.5% in one week.

Silver volatility is going to be a big issue this year. While always subject to violent price swings, silver is going to be operating in a stranger environment than usual…

Why Volatile Silver Prices in January 2015 Will Continue

Europe's economic issues give silver reasons to both rise and fall in 2015. The result will be plenty of short-term volatility.

The Eurozone's problems with deflation and slowing growth will bolster concerns over the global economy. That typically supports investment in gold and silver and hard assets.

But the Eurozone could also provide a headwind. You see, the Eurozone announced at the end of last month that it is embarking on a Eurozone quantitative easing program.

While a euro devaluation would be good for silver as investors ditch the euro, it will also strengthen the U.S. dollar. A stronger dollar makes silver cheaper (in terms of dollars.)

Longer term, though, the dollar won't be able to maintain this strength. That's bullish for silver – and another reason we look for price dips as buying opportunities.

Another short-term headwind comes from the silver futures market…

Mr Bach, The rampant volatility in the silver market has given me pause to rethink part of my strategy to weather the impending financial chaos. The world economy in my humble opinion is the old "smoke & mirrors" routine. With the major world powers printing fiat currency to service their debts and deficit spending at record levels, how much longer will the "house of cards" stand? How much of this newly created fiat currency is being invested in precious metals? Please pardon my rhetorical questions, but I do not see the use of QE as any sort of sane resolution to the problem at hand. In an attempt to solidify my position, I recently converted all my private mint silver rounds to Silver Eagles. Yes, I did take a moderate loss overall, premiums being a major culprit, but US minted coins (gold and silver) will probably be the most readily acceptable medium of exchange when our economy implodes. Yesterday, spot silver prices fell to $16.24 per troy ounce. I purchased an additional 225 Silver Eagles putting me on track to own 100 troy pounds of silver be fore the end of this calendar year. I believe my actions may be a little extreme but I think the ends justifies means. Better to be prepared for the worst case scenario and be pleasantly surprised if the crash does not occur. Best regards, Dave Keep on stacking!