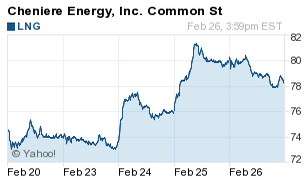 The veto injects new stimulus to the boom in transporting crude by rail. Cheniere owns nine facilities that turn natural gas into its liquefied state. They will benefit if the Keystone doesn't get built.

LNG stock has been one of our favorite energy picks for more than four years. Money Morning Global Energy Strategist Dr. Kent Moors first alerted readers to its profit potential in November 2011 - when it was trading at $10.37 a share. It's up 671% since then.

In 2014, Moors said natural gas stocks were poised to provide investors with the best opportunity in a decade. And he again singled out Cheniere as a top pick. It's up about 44% since then.

And it's not too late to profit. Here's why LNG stock will continue to climb...

Investing in Natural Gas in 2015

Consumption of natural gas has grown rapidly over the last six decades. Natural gas accounts for nearly one quarter of the world's energy supply, according to the Energy Information Administration (EIA). Its share of total energy increased from 17% in 1950, to more than 50% in 2014, according to a 2014 Congressional study.

Global natural gas demand is expected to grow by more than half by 2040 - the fastest rate of all fossil fuels - according to an annual forecast by the International Energy Agency (IEA).

Demand for natural gas has been growing faster than oil, thanks to its affordability. And the main drivers are Asia, the Middle East, and Latin America thanks to industrialization and growing economies in these regions.

LNG is the fastest-growing component of the global natural gas market, increasing at a 7% annual rate over the last decade, according to the EIA. For countries that lack indigenous natural gas resources and delivery infrastructure, LNG represents a rapid and cost-effective means of introducing natural gas into their local fuel mix.

This global demand for LNG is why Cheniere is the sector's best bet...

Why Cheniere (NYSEMKT: LNG) Stock Is the Best Play

Cheniere is a liquefied natural gas company that owns and operates the Sabine Pass LNG terminal in Louisiana. Based in Houston, LNG is also developing an export facility in Corpus Christi, Texas.

LNG exporting is possible because of the shale gas boom. And Cheniere is the true pioneer in the LNG exporting space.