The best mutual fund in tech has notched annual returns of nearly 11% without owning a single share of a big tech darling.

The performance of this fund, the Fidelity Select IT Services Fund (MUTF: FBSOX), makes it the tech sector's best mutual fund for the past 15 years.

"This is a very concentrated fund. And while it has companies like IBM that people have heard of, it has a mixture of small and mid-cap companies that will fly below the radar for most investors," Todd Rosenbluth, director of mutual fund research at SP Capital IQ, told Reuters. 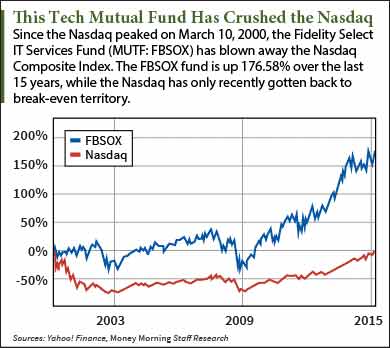 Kyle Weaver, the fund manager since 2009, says that 80% of the Fidelity Select IT Services Fund is invested in such tech services. The absence of any sexy tech titans is very much on purpose.

"We're looking for companies that have a high degree of recurring revenue that aren't very glamorous and operate in the background of our lives instead of front and center," Weaver told Reuters.

You can't argue with the results.

Since March 10, 2000 - the peak of the tech bubble - the fund has posted an average annual return of 10.9%. According to Lipper, that's more than double the second-best mutual fund in the tech sector.

The fund's total return over that 15-year span is 176.58%. The Nasdaq Composite Index meanwhile has been flat, having only recently gotten close to the all-time high it reached back in 2000.

So what are the stocks at the heart this mutual fund?

How the Best Mutual Fund in Tech Was Built

While the FBSOX fund shuns the big names of tech, it does own quite a few recognizable names...

Sounds to me like a Value fund with Tech. companies that have moderately high growth potential, as well. Apple was once in this high growth category. If you sold Apple in 2012 near its all-time high or thereabouts, you have missed some upside. If you sold in 2007, you missed some additional gain.

I don't think trading out of stocks is necessarily a better option for all investors, but you do miss the volatility that high P/E and momentum stocks often exhibit. The fund has about a 74% annual turnover in its holdings, so I would bet it generates lots of capital gains taxes and trading costs. These hidden costs have to be added on to the fund's annual management fee. For growth, you always have to be looking at new prospects. Not all managers are good at doing that.