The total number of outstanding shares is 110.9 million. Based on the closing price, Etsy commands a $3.3 billion valuation.

The deal diverts attention away from Silicon Valley toward the New York tech scene. The last tech company from the Big Apple to raise more than $250 million was Barnesandnoble.com in 1999. 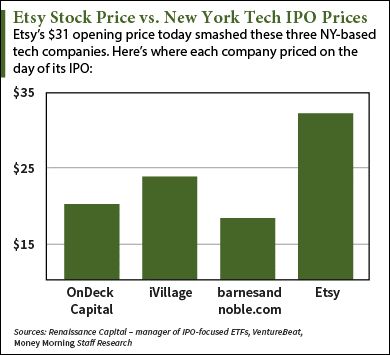 Etsy is a Brooklyn-based e-commerce company that allows users to buy and sell homemade items. These products include everything from art and photography to food and bath products.

The company is now the biggest New York tech IPO since the dot-com bubble. The previous holder of that title was OnDeck Capital Inc. (NYSE: ONDK).

OnDeck is an online loan platform that has issued over $1 billion in small business loans, according to Renaissance Capital, a manager of IPO-focused ETFs.

More on Etsy IPO: Etsy is one of the most unique stock debuts of the year. But is it worth buying ETSY stock? We break down whether or not you should buy into the Etsy IPO…