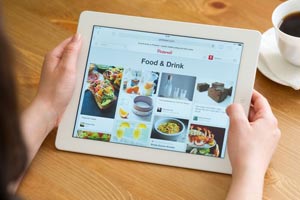 The digital scrapbooking website has had an $11 billion valuation since March. This came after it received a new round funding from its investors.

The high valuation is so shocking because Pinterest's efforts to generate meaningful revenue are still in the early goings.

How Does Pinterest Make Money on Big Brand Names?

The first part of answering the question, "How does Pinterest make money?" is to look at the big name advertisers using Pinterest as a platform.

Pinterest originally allowed users to create business accounts in December 2012, but their first efforts to make money began in earnest in February 2014. This was when the company began a beta program to allow its larger U.S. corporate partners to buy advertisements on a Cost per Mille (CPM) basis. This was part of their "Promoted Pins" program.

"Promoted Pins is a way advertisers can amplify the reach of a pin by showing it more often in category and search feeds on Pinterest," Mike Mayzel, a spokesman from Pinterest told Money Morning in an email.

These partners during the beta test included names that ran the gamut from specialty retailers like Gap Inc. (NYSE: GPS) to big box names like Target Corp. (NYSE: TGT), as well as entertainment brands like ABC Family.

Here's how the CPM model works.

The main goal for brand names in advertising is to grab market share. They aren't particularly concerned with engaging Pinterest users and getting clicks on their content as they are in getting consumers to think "Gap" when they decide to shop for clothes instead of "Urban Outfitters" or "H&M."

It's about increasing their visibility across ad platforms. With Pinterest, a user will search a particular interest. Their page will then be populated by a matrix of images they can then pick and choose from to "pin" to their own page – which looks like a virtual corkboard.

In our example above, Gap will pay Pinterest to favor their promoted pins in a relevant search. Let's say a Pinterest user searches "fashion." Gap will want their ads to show up more prominently in that search than their competitors' ads.

Gap is paying for "impressions" – that is, the amount of times their promoted pins will show up in a user's search on a relevant keyword.

Cost per Mille, which can otherwise be read as "cost per thousand," is the amount a company pays for a thousand ad views. It's calculated by taking the amount spent on an ad, dividing by the amount of impressions, and multiplying that by 1,000. That will give a large company an idea of how much it is spending on advertising per thousand impressions on their ads.

The beta test for this CPM-based promoted pins model ran from February 2014 to the start of 2015. This was when Pinterest opened up promoted pins for all large brands.

But exactly how does Pinterest make money on companies that don't have the name recognition of Gap and the like?

The bad part is, there are bots out there clicking and pinning promoted pins using fake profiles. I found one that pinned my promoted pin 11 times on the same board. This happened to me and luckily I was paying attention but who knows how much money Pinterest is making from this happening.

The thing is, this is true for every social media site that offers advertising, and heck, probably for every advertising platform out there. It's basically just a fact of life that you have to accept and account for, kind of like how retail stores have to account for theft.