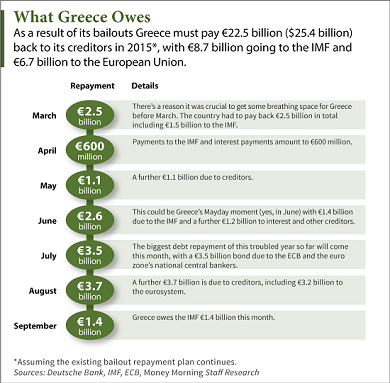 A Greek default is inevitable.

After years of piling up bailout loans on an already severely debt-ridden Greece, the Eurozone finds itself in the situation it is in now. Each maturity or rollover date on Greece's debt is another financial news headline.

And with each looming repayment deadline, there's a discussion over whether that one is the one Greece won't have the cash to pay back.

It has yet to miss one of these deadlines since the Syriza party stepped into power in January. But the 7.2 billion euros ($8 billion) of bailout money Greece has been trying to tap won't be disbursed until the country shows its creditors it's making meaningful reforms to cut its budget.

And for all the pledges to privatize public assets and crackdown on tax evasion, Greece hasn't made any true efforts to address pension and labor costs - what its creditors really want to see. Even worse, just last week, Greece rehired thousands of civil sector workers who were let go under prior international agreements, effectively defying creditors on previously agreed-upon bailout conditions.

The Greek Syriza party wants access to bailout money - but it also doesn't want to risk alienating the voters who swept Syriza into power on a populist, far-left mandate.

And this is why there's no way to solve the Greek debt crisis without a Greek default.

Either Greece will be forced to negotiate a major write-down, if not an all-out default, or exit the euro altogether, reissue the drachma, and then renegotiate its debt still outstanding in euros.

In every case, a Greek default is the end result. "Extend and pretend" can only continue for so long before Greece, the IMF, and the major Eurozone creditor nations tire of the brinkmanship inherent to conditional bailouts - especially when Greek left-wingers continue to defy those bailout terms.

But it's not the more than 324 billion euros ($362 billion) in Greek debt that's the biggest problem here.

Author Satyajit Das wrote in 2010 in his book on derivatives called Traders, Guns and Money that every $1 of real capital is supporting another $20 to $30 of leverage. It's hard to believe that even in the event of Greece defaulting on all 300 billion or so euros of its debt, that it will be confined to just 300 billion euros of asset destruction.

"They've all cross-collateralized in Europe," Money Morning Chief Investment Strategist Keith Fitz-Gerald said. "So, Greece's debt is spun out to France, banks in Germany, banks in Italy - Europe is this huge spider web of cross holdings."

And that's where the real peril of a Greek default comes to light...

How a Greek Default Could Devastate the Eurozone Financial System

In summary, we can expect some glitch to happen eventually and a panic to ensue, causing potentially high spikes in market volatility. These will present themselves on short notice as terrific buying opportunities, as did energy companies in Dec. and Jan when the U.S. Dollar Index was pushing 100.

Since then, the dollar has corrected down and oil has gone up to $60/barrel. It was a great opportunity to pick up select assets on the cheap. Its a way to play the fragile market structure we are stuck with since 2008 based on a credit and debt economy, rather than production or hard assets.