Only politicians and some Keynesian economists could convince themselves - along with a good portion of the masses - that more debt is the solution to the world's already crushing levels.

It's gotten so backwards, it's downright scary.

Yet there are some practical things you can do to avoid getting sucked under by the growing sea of debt.

The Staggering Growth of Borrowing

According to a study recently published by the McKinsey Global Institute, a research and consulting firm, worldwide debt levels have exploded. Although common sense had many expecting that world economies would deleverage after the Financial Crisis, the exact opposite has taken place.

We've now seen global debt balloon by an additional $57 trillion since 2007, raising the world's debt-to-GDP ratio by 17%. In other words, we're now more overleveraged than before the crisis. 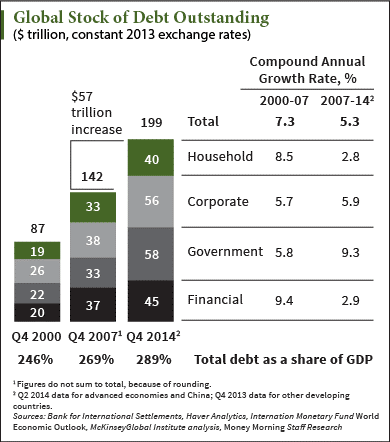 Global debt levels have reached an astronomical $200 trillion (see chart at left), representing $27,200 owed for every single human on the planet. Unsurprisingly, growth in government debt has outpaced that of financial, corporate, and even household levels, growing at an aggressive 9.3% annually between 2007 and 2014.

Not surprisingly, a large portion of government debt growth originated specifically because of the crisis. New taxpayer guaranteed debt was used to repay or otherwise secure delinquent or trash debt.

And yet when used properly, debt is a solid, proven financing option to fund crucial projects like infrastructure expansion, acquire income-producing properties, and facilitate homeownership. In excess, the servicing costs of too much debt slows growth and ups the risk of future financial crises and exacerbates their accompanying fallout.

McKinsey's Debt and (Not Much) Deleveraging report examines the state of debt across 47 nations - 22 advanced and 25 developing. 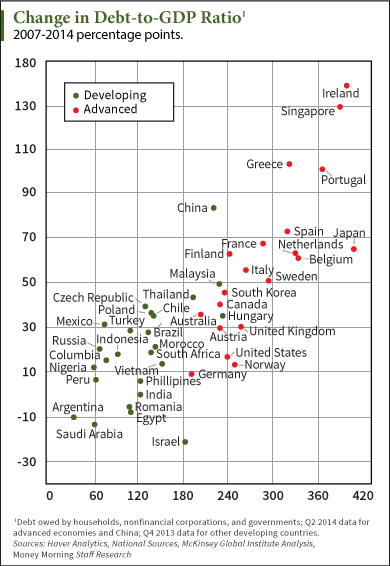 Three main concerns emerge in the report: Large and ever-increasing government debt, household debt, and total debt, specifically in China. China gets singled out for dubiously quadrupling its debt to $28 trillion, reaching 282% of GDP in 2014 and placing it ahead of some advanced economies. Half of all lending is linked to its overheated real estate market.

Overleveraged real estate financing is a problem reaching well beyond China. The study finds that mortgages are the main source of household debt in advanced economies. Low rates - thanks in part to the Fed and its ZIRP - have spurred larger mortgages, leading in turn to house prices being bid ever higher.

So does the consulting firm offer any concrete solutions to these problems?

Sadly, no. Instead, the Institute spews out all-purpose solutions to government debt like more widespread asset sales, one-time taxes on wealth (which I've warned you about before), and more effective debt-restructuring programs.

Given the dire state of government and household debt, what can you do to improve your own situation and avoid becoming a victim of leverage?

Item 1: I frequently read about all the debt that is out there, but no one seems to tell the reader who (i.e., which individual persons [whether directly or indirectly through corporations]) holds all these "IOU's". Would really appreciate seeing an article on that! They can't be aliens. They have to be living on this planet somewhere.
Item 2: Any chance of labeling the x and y variables on the "Change in Debt-to-GDP Ratio" graph?

Appreciate your articles, especially since they are not "same-old, same-old".
Well written also, I thought.