China and the International Monetary Fund (IMF) want a yuan reserve currency – and are doing everything they can to make it happen.
Their plan is already so far along that the U.S dollar could be on its way out as the world's primary reserve currency as early as September 2016.

That's when the IMF will hold a vote to determine whether to elevate the Chinese yuan to a reserve currency. The People's Bank of China, the Chinese central bank, has demanded the IMF do just that. 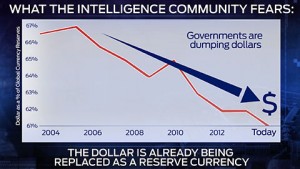 The consequences will be dramatic – and terrible for the United States.

A yuan reserve currency will trigger a transfer of $1 trillion into Chinese assets just in the first few years.

It matters because much of the money pouring into the yuan will result in sales of U.S. Treasuries – how most governments hold dollars. When foreign governments start to dump the $6 trillion they hold, U.S. dollars will flood the market and trigger massive inflation.

In fact, the race to dump the U.S dollar has already started – even before we get a yuan reserve currency.

Why the CIA, FBI, Army, and Navy Are Preparing Now for the Fall of the U.S. Dollar

The CIA's Asymmetric Threat Advisor, Jim Rickards, says this is no accident. He's revealed that the IMF has a 10-year plan to replace the U.S. dollar as the world's top reserve currency.

He pointed to an IMF report called "The Dollar Reigns Supreme by Default" that specifically says, "The dollar status should be in peril."

Now, it makes sense that China would want to dethrone the U.S. dollar. Its rivalry with the United States dictates that it seek every possible advantage.

But the bigger concern is why the IMF is so focused on taking out the U.S. dollar. It has to do with something called "Special Drawing Rights," or SDRs.

"That's why they came up with the name Special Drawing Rights – because if they called it 'world money' that would sound a little spooky and scary," Rickards said.

The IMF's plan to dethrone the U.S. dollar is in fact part of a grand scheme to put the IMF in charge of the world's monetary system. In short, the IMF wants to be "the central bank of the world."

Yet as ominous as that sounds, it's only one of five flashpoints Rickards sees that threaten the U.S. dollar. In fact, Rickards has uncovered evidence of a looming economic crisis that will eclipse even the Great Depression of the 1930s.

Continue here to find out more about what to expect – and how you can protect yourself and your family.

the united states Government must recapitalize our gold and silver reserves with our many trillions of dollars ,this should have already started .The buying of gold and silver is a matter of national security.Our credit problems must be reduced and quickly by renegotiating the debts for all markets ,to China and our domestic credit debts.A military action will only make us poorer we must work with all our friends and open trade in a way that will benefit all of us ,to fill our accounts with cash not debt.This can be done and they know it but will they do it ,what is their agenda..?

Their agenda is to increase their personal wealth as rapidly as possible no matter the consequences to the nation. U.S. politicians sell their votes to the highest bidder and pass any legislation the people want, no matter how ultimately defeating, to retain political office.

There are lots of problems out there.

It is only a matter of time people.. and until you start realizing that, nothing will change.

We are so far in debt we have no possible way of getting out of it except to basically collapse completely economically. There is NO way of ever having enough money to pay the debt at this point.

I have given up on our government. The greed, the control and the lack of any oversight means this will only get worse. The government ignores the people and now only pays attention to the very top elite money grabbers and power brokers.

The day is coming, mark my words.. the day is coming when we will head into full on collapse of the system… and you can bet when it does, the first thing the masses will go after WILL be those at the top that caused it.. and all the money on the planet will not help them then.

For me, I see the writing on the wall. Instead of relying on others for my day to day living, I went self sufficient and made some basic plans for the future. When the financial system collapses, I will be just fine.. food, water, shelter etc… Will you? After in a 'just in time' supply system, running to the store will no longer be an option.. and for those of you sitting in a city… well you are screwed..

The point to remember and the US government knows this That the Amount Gold in fort know is only 1/10 the amount of gold in the US Rocky Mountains? There is one company allowed to remove the gold from the ground deposits. They have developed new Technics on bringing the gold out of the ground. 2)Not only is China stockpiling the gold, but also the US has allowed the Rich and others in this country to buy and hold gold within our country. This means that along with fort Knox having now 1/20 of the gold in this country 10x the amount of gold is also privately own through out the banking systems and in the homes of Americans and the US has majority of the worlds Diamonds and Platinum in the world. So it is safe to say if you take the amount of gold in Ft Knox multiple it by 20 well that is the amount of gold in the US 9.5 million x 20. Now for platinum I have been unable to calculate the amount the US has because the number 1 mining place is south Africa and the number one user of platinum is American cars and every car that is destroyed and all the catalytic converts replaced every year they do not send the cars to melt down with the catalytic converts in them all of them are turned over to the US government for reconstitution process and then stored by the US government. Since this is held in secret the value and amount the US has changes every year which is why the catalytic converters can not be resold to the public From any muffler shop or salvage yard each converter is serial number and the Government tracks those numbers? you might say the US has cornered the platinum market and it is safe to assume that the US dollar is safe and can withstand the IMF spasming out cause the US was very smart grabbing up all those converts used since the 70s when they started using converts?

see they say China has been buying gold since 2000 at a very high price I wonder what they bought it with cause the Yuan is worthless???? They used all those US millions they had to buy the Gold which means most of that money was spread around the world and then giving back to the US when they bought our fast food and other products over time. I doubt if China has very much US money left at the rate they are buying stuff building all those Ghost cities like the world is going to flock to those cities to live.

Well, since the Yuan has gone UP 34 percent against the U.S. Dollar since 2005, I would not say that the Yuan is worthless!

The really CRAZY thing is that Donald Trump keeps telling Americans that "China is devaluing its Currency” (Renminbi Yuan), when one U.S. Dollar bought 8.28 Chinese Yuan in early 2005 and THEN 6.2 Yuan on June 16, 2015, when Trump announced he was running for President. (You can actually GOOGLE this stuff!)

Of course, when the IMF makes its move – Trump will say “no one saw this coming!

Yeah, like when a country has over FOUR TIMES our Population –NO ONE could see that one day its economy would be larger than ours! IT’S UNBELIEVABLE! AND TRUMP STRONGLY IMPLIES IT’S ALL OBAMA’S FAULT! IF TRUMP WERE PRESIDENT IN SEP 2014, CHINA WOULD NOT DARE TO MAKE ITS ECONOMY BIGGER THAN OURS! NO SIREE BOB!

And the IMF move on October 20, 2015 will make the Yuan go even HIGHER. Since Trump does not like it when China “devalues” its currency, will he like it when the Yuan goes UP?

I THINK : NO, HE WILL NOT! Trump will imply that if TRUMP were President in October 2015, the IMF would not DARE TO MAKE THE YUAN A WORLD RESERVE CURRENCY! (That other countries would hold in their Treasuries – in many cases, replacing the U.S. Dollar!) Trump will “blame it all on Obama” and will say that “China is laughing at us!” and “The IMF is laughing at us!” The scary thing is Trump could get himself elected President just based on that!

When China hears Trump speak, they must be thinking “what the heck are you talking about”?