There's a new goal sweeping across Silicon Valley. Tech's biggest names want to fight death by figuring out how to look and feel young for decades.

In March 2014, tech entrepreneurs Craig Venter and Peter Diamandis founded Human Longevity Inc. The biotech's goal is to create a database of 1 million human genome sequences, including from supercentenarians. The founders hope the data will shed light on how to stay young forever and live a healthier life.

But not far from Google headquarters, a man with a beard down to his chest has been leading the immortality revolution for more than a decade...

The Leading Mind Behind How to Stay Young Forever 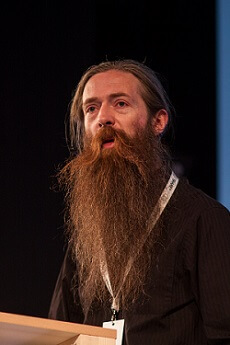 Fifty-two-year-old Aubrey de Grey is the chief scientific officer at his own charity, the Strategies for Engineered Negligible Senescence (SENS) Research Foundation. The nonprofit organization focuses on applying regenerative medicine to the aging process.

That's just one of his jobs. He is also a biomedical gerontologist, published author, and editor-in-chief of the academic journal, Rejuvenation Research.

But his most difficult job is inspirer.

Since beginning his age-related SENS research in 2005, he has embarked on a quest to inspire the world to eliminate aging and extend the human life span indefinitely.

Inspiring that movement is his most difficult job. He considers the world to be in a "pro-aging trance" - people are happy to accept aging as an inevitability rather than a medical problem that science can solve.

"The problem we have today is we've got people who are willing to accept and come up with arguments against the defeat of aging," de Grey noted in a forum at The Amsterdam School of Creative Leadership. "They do it simply because they don't want to get their hopes up and they have a fear of the unknown."

Over the years, de Grey has inspired the right people, including billionaire entrepreneur and PayPal Co-Founder Peter Thiel. After the two met in 2004, Thiel cut de Grey a check to continue his anti-aging research.

Since then, Thiel has donated a total of $3.5 million to de Grey's other nonprofit, Methuselah Foundation. Methuselah's mission is to discover drugs that cure seven different types of age-related damage.

"I've always had this really strong sense that death was a terrible, terrible thing," Thiel told The Washington Post. "Most people are in some weird mode of denial and acceptance about death, but they both have the result of making you very passive. I prefer to fight it."

Thanks to influential anti-aging proponents like de Grey and Thiel - and the work of thousands of U.S. scientists to find a cure to the world's most widespread disease - the answer to how to stay young forever is here...

Back in January, a gene treatment at Stanford University advanced to clinical trials. It was discovered that it reversed the biological age of 60-year-old human skin cells by 25 years.

After just "a few days of treatment," the cells became indistinguishable from the cells of a 35-year-old.

On the other side of the country, Harvard doctors followed suit. They activated the same immortality gene in mice. It extended their life span from two years to nearly four years. This medication could be available in as little as two years.

Not only will these new advancements change the aging process forever, but they will also create one of the greatest investment opportunities of our lifetime.

You see, the field of human medicine is shifting dramatically toward more anti-aging research. By 2018, the anti-aging market is expected to hit $345.8 billion a year.

In fact, Money Morning Defense & Tech Specialist Michael A. Robinson, a 35-year veteran of Silicon Valley and one of the top tech financial analysts in the United States, knows the perfect way to profit from this exploding market right now. The best part? Hardly any investors know about it yet...

You shot yourself in the foot by drifting away from the "Life Extension" theme into other investment opportunities.

At 70, I'm only interested in the life extension stuff.

You are so bright, you are dumb.