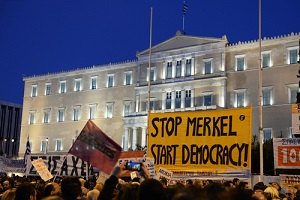 The Eurozone and the Greek people are wondering what happens if Greece exits the euro.

The conventional wisdom is that Greece would abandon the euro, adopt the drachma, and then work to devalue it to boost export competitiveness and grow the economy.

There's one problem. Export-led growth increases the price of imports. It squeezes labor. And for the reform-minded leftist Syriza party determined to leave labor off the table in negotiations - lack of labor reforms from Syriza is the main reason Eurozone officials have refused to release more bailout loans - it wouldn't make much sense for Prime Minister Alexis Tsipras to pursue such a politically suicidal path.

It's also not as simple as adopting a new currency, devaluing it, and then growing.

When the recently fired Greek Finance Minister Yanis Varoufakis did a tour for his book, "The Global Minotaur: America, the True Origins of Financial Crisis and the Future of the World Economy," in 2013 - well before he was in the political limelight - he outlined why Greece shouldn't go to the drachma.

A video of his book discussion surfaced earlier this year and was recognized more for one scandalous moment where Varoufakis appeared to "give Germany the finger," but it gave a glimpse into how the Syriza party views a "Grexit."

He didn't buy the argument that Greece could do what Argentina did in 2002, when it defaulted on its International Monetary Fund (IMF) loans.

Argentina didn't abandon its currency and devalue, Varoufakis said. They abandoned a peg to the dollar. The banking system was already awash with Argentinian-issued pesos and the devaluation came naturally.

Greece doesn't have the drachma. It has euros that are rapidly fleeing the country.

"When you don't have a currency, you can't devalue it. All you can do is, you can announce, 'In eight months, we're going to have a currency and, by the way, we're going to devalue it,'" Varoufakis said in that discussion. "Can you imagine a preemptive announcement of devaluation eight months before it happens? This is a recipe for having all wealth liquidated and leave the country."

Argentina also had a ready-made export market, he added. They had tracts of lands with soybeans that China was ready to buy.

Greece has none of that.

The obvious pressures on labor, and the criticisms from a man who was just recently Greece's lead financial representative on the world stage, point to the unwillingness of Syriza to accept a Grexit.

So why did the Greek public, motivated by a new leftist zeal and empowered by their populist government elected in January, vote "no" to more bailout money and raise the specter of a Grexit this past week?

This was a "no" vote that Varoufakis endorsed, by the way.

What Happens If Greece Exits the Euro?